A Review of Succubus: Succubus by Olga Berg

A Review of Succubus by Joyce Melbourne 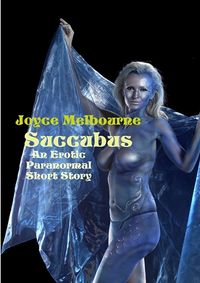 Why it is that so many authors need to show Succubi as being nothing more than monstrous things when they can offer more than that if they just take a little risk and move away from the everyday into the extraordinary?

A woman is seduced by a succubus; a being in a female form, who drains her of both her sexual, and life energy.

Avery finds herself haunted by the touch of a woman in her dreams and as her dreams become her life, her life ebbs away piece by piece until only the touch is left and nothing more.

Avery seems, from the beginning of the story, a very interesting character and at the beginning that’s more than enough to hook me into the story. The problem is that when the succubus appears Avery becomes… less. She’s less intelligent, less focused, less alive as a whole. While much of that is the effect of the succubus upon her, it does take away so much of the character quirkiness that was present and replaces it with a dull personality for the most part of the story.

That’s a shame because I think the story would have been more interesting if Avery would have a clear mind and be able to, if not completely resist the call of the succubus, then at least be able to respond to the help she is offered by the one person in the story that she should have listened to. Instead she pushes them away.

As well, that action doesn’t feel right for the one she refuses as, considering the relationship they had, they should have done more than they did. They turned into an afterthought, almost a red herring in a way, and that just bothered me. Perhaps not all stories have to end on a positive note, but in this case I think that would have helped this story a lot considering where it ends.

The succubus is, save for her being interested in Avery, a fairly stereotypical succubus with but a single purpose in her thoughts as the story progresses. As the time that Avery spends with her goes on, the succubus turns from being something erotic into something more monstrous which climaxes at the end of the work as a scene that just took away anything and everything that had been accomplished in the story to that point. There was hints of something different, but it didn’t arrive. There was a moment when the story could have turned towards something more positive and hopeful, but it didn’t go that way.

In short, I just didn’t find that I enjoyed this work as much as I wanted to. It was lacking focus, a great deal of heat, and the stereotypical actions of the succubus just didn’t do anything for me. Even when Avery had a slight clue about what was going on, instead of taking the story in that direction, it is tossed aside for a bit more time between the succubus and Avery, but not before Avery is chastised for asking a question that, to me, should have been answered if for no other reason than in the setting it was asked, it should have been.

I’ll give this work one and half pitchforks out of five.

Stereotypical succubi I just cannot find interesting at all. Erotica with pain and suffering doesn’t do much for me either. To have a story that offers such a good plot and characters come to the end that it does really doesn’t do the story justice and that’s the greatest shame of all…