Succubi Image of the Week 394

A Review of the Darkfallen series by Leona D. Reish 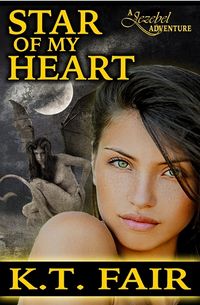 Star of My Heart written by K T Fair

A review of the first work in a series that I think has a very interesting premise to who the Succubus of the series sees herself as and what she has decided that matters to her. She’s intelligent, she has a soul… in a way… and most importantly, she gives a darn about others. But something in this particular work bothers me a lot.

Some subject matter makes me cringe, and honestly in some cases that isn’t because of the story, or the characters, it’s about the question of my personal comfort zone and in this case, regrettably for the rest of the work I really liked, that took quite a lot of that away…

My name is Jezebel, but I’m not your typical succubus.

Oh, I am a demon who seduces men in order to drain their life away. I’m also immortal, gorgeous, and amazing fun at parties — at least until the end. I’m all of those things, but I also have something that no other succubus has.

And let me tell you, in my line of work, that’s not an added benefit.

Jezebel is a Succubus that has been around for a very long time. But as time has gone on she’s discovered that taking the souls of the innocent haunts her and in ways that she can never forget or forgive herself for. But there are those in the world that are dark, evil, and their actions make taking their souls a lot easier… even if some of them just deserve to die.

I like Jezebel very much… She has a few quirks mind you. Some I like, she has no hooves and notes that she prefers things that way, and she has a tail that is a bit too dangerous a thing to be playing with when a Succubus gets a bit horny. She has the most interesting personality and as the story is told from her perceptions, that gives a lot of moments where that personality really comes out and tells a lot about her. She isn’t, not really, evil, and that made her a lot more interesting to me in that she made a choice and she abides by it. She is tempted, on occasion, to break the promise she made to herself, but her will is strong and that made her such an interesting Succubus in my thoughts.

Through the course of the story the life that she leads, the single friend that she has, matters to her and in that friend there’s something important for her in that relationship. When she is forced into doing something to look after that friend, to protect her, that changes things and that story is one that needs to be told in the next part of the series I hope.

She does find some dark souls that she can take and not feel guilty about, but in one case, and it makes up the core of this story and reflects on the title as well, it’s a subject that I found hard to read about, even though it was fiction. What she was forced to do, and what happens through that action just made me very uncomfortable and while I understand that is was important to the story and fits in with her decisions of the past, I just didn’t like the last part of the work as much as I did the rest.

There really isn’t very much erotica in this work and for the most part I don’t think it hurts the work but rather improves it very much. It also gives more of a chance for Jezebel’s story to be told and that made the work a more solid piece of writing. The story is told well, there is meaning to the words and I really did feel for her when the story was over. But, and I regret this, her decision to become someone else in order to have revenge, or justice, depending on your point of view, just was very creepy and unsettling.

The ending is a slight cliffhanger, and it obviously leads into the next work in the series which I really want to read. I just hope that where Jezebel is at the end of this work isn’t where she is for too long in the next one. Her character and drive is better than that and there are so many plots left to be explored. Those are the things that I want to see unfold and I think they will.

I like Jezebel, I like her a lot. But the story turns in a direction that I really was uncomfortable with. I hope the next part of her story gets away from where it ended really quickly because if it stays there too long I don’t think I’ll be able to continue.