A Review of Redneck Succubus: Revenge: Served Hot and Sexy with a Side of Deadly by Beatrice Evenmorne

A Review of My Gay Incubus by Mal Rhinehardt 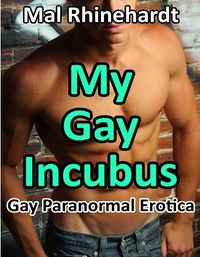 My Gay Incubus by Mal Rhinehardt

Life can be, a lot of the time really, something that beats you down, makes you wonder why things are as they are, and most of all, question yourself, your choices and more. Sometimes in order to survive, we draw away into our dreams and find what comfort we can in them.

But what happens when the dream world and the real world meet in an unexpected way? What makes that connection? More importantly, what do you give up to have something you need?

Stan’s been laid off from work and life isn’t going his way. But every night, he looks forward to going to bed so that he can have another vigorous encounter with the mysterious demon who visits his dreams. The dreams are always intense and heated. He can’t enough. But one day, the dreams become real as the demon shows up at his door, ready for more.

Stan’s life has, in short, gone to hell of late. Nothing is going right and he struggles to make it through the day. The only solace he finds is in his dreams in which he encounters an Incubus. One morning his dreams become real, but then the question is what does he give up for them?

The one thing that seems to be a constant theme throughout this work is that overriding loss that Stan suffers more than anything else. Quite a lot of the story takes up his past, the situation he is in, and just how much pain and suffering he goes through everyday.

While this is a hot flash in that the majority of the work revolves around Stan and the incubus being intimate with each other, there’s really not a lot of plot otherwise to tie things together. The writing is very good and the scenes are told well, but there’s something missing as the story progresses that, for me, leaves it lacking.

One of those things is the simple fact that the name of the incubus is never revealed. Stan is given a way to find out, and he seems to take it, but at the end, we still never know. As well there is the problem of what happens between them both, what is Stan’s future that isn’t touched on. The work ends on questions that never really are answered.

A hot flash doesn’t need to tell everything, but it helps to have closure to the work at least. It’s also good to name the characters and not leave them question marks. As well having all of Stan’s troubles being so much of the story as a whole takes away from the romance/erotica. I don’t expect every story to end on a positive note, but I also don’t expect a story to have so much hurt within the story that it takes away from any joy that the characters might have.

There’s also the question of what the motives of the incubus are. There’s a line in the story, really it is a throw away line more than anything else, but it brings up the question of whether Stan is the “one” or just “one of many”. That particular question is left open, but I found myself pondering it as the story came to its climax.

The ending at least gives Stan something that he desires, but the questions left just make that ending something that didn’t turn out to be what it could have been.

There was too much dwelling on Stan’s situation, how bad things are. That tended to haunt the rest of the story and when the ending came there were questions left unanswered, not the least of which being the name of the incubus himself.