A Review of Misty Shalimar – Modern Day Succubus – Cowgirl Up! by Pamela Parkman

A Review of My Teacher the Futa Succubus by Sasha Scott 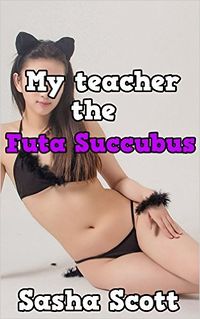 My Teacher the Futa Succubus by Sasha Scott

There are some stories which are rather hard to read as a whole. That sometimes is the writing, the tone, occasionally it is all of the spelling mistakes. Sometimes it is trying to read a work where it feels like the story was translated from another language and badly so.

But then there are stories where it seems like someone read a manga, wrote out the dialog and tried to piece it all together using translation software. At that point the story just is completely unreadable.

An issue presents itself as Miss Britton prefers girls to boys, but she has just the solution when she warps Yuki’s feminine male body into that of a full fledged woman, signalling the start of a new life filled with debauchery.

Yuki is attracted to his teacher and then discovers she is a succubus, falling to her powers. But Miss Britton doesn’t like boys, changes Yuki to suit her needs, and then… things happen.

I know that’s not a really good summary of this work, but in truth that reflects how poorly this work is written, edited, and presented. I found it incredibly difficult to read, at times actually painful to try to understand what was happening. The work reads, very much, like it was written in Japanese, as a manga book, then dropped into Google translate before being published with no editing, spellchecking, or the most basic of touchups to make it read better and make some kind of sense.

One example of how hard this work is to read can be found in this single paragraph:

He wiggled closer until he was pressed opposite her, nervously squirming around against the front of her desk. She slowly rose upwards, rising up above the small asian boy. Her hands grasped down across his face, freezing him in shock. She drew down, closer and closer, her hot breaths stroking over his features. Her piercing glance stirred into his eyes.

It’s just awful honestly. The entire work reads like this, spelling mistakes, punctuation errors and so on.The grammar is poor, the story is barely there beneath the writing. The characters are hard to understand, what they are doing is as well. There’s such a disconnection between what the author is trying to say and what is written on the page.

The entire work needs a lot of assistance just to be clear in what happens within it. As much as I try to find the good in the works that I review, in this one I just cannot manage to do that. The author would be well advised to completely rewrite this, clean up the dialog, make the story sensical, and, at the least, fix all of the spelling and grammar errors. All this work manages to do is make me shake my head in disbelief. If this wasn’t a Kindle Unlimited I would have felt cheated in having to pay for this work.

This is just such a painful thing to read by far. A lot of editing, spelling correction, and rewriting to make the characters sound like characters and not a mishmash of strung together phrases would be a good place to start.