A Review of My Teacher the Futa Succubus by Sasha Scott

A Review of Misty Shalimar – Modern Day Succubus – Cowgirl Up! by Pamela Parkman 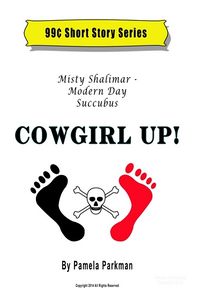 It has been quite some time since there has been a work about Misty Shalimar, who appeared in a work that I reviewed back in January 2013. At the time I had some very high praise for the story and Misty herself I thought was a really good Succubus character.

A second work appeared last year and while Misty has returned… The story itself is missing something. It doesn’t quite read the same nor does it have quite the same style as the first work did.

That’s not to say that work isn’t interesting, for it is, but compared to the first… It needs some help in a few places.

The story tells the tale of:

Young Misty and The Professor go for a short vacation to a cowboy town in Northern Arizona. Misty almost lets herself go too far with a local after riding a bull stirs her inner juices. The young cowboy’s life is saved when a local thug decides he wants to take Misty for the ride of her life.

Three years have passed since Misty became a succubus and in that time she and the Professor have been roaming around America looking for those that deserve Misty’s personal kind of justice. They take a break in a small town in the middle of nowhere and Misty is attracted to someone that interests her. However someone else decides that Misty shouldn’t have ignored him and things take a turn that she didn’t expect… or want.

Misty is every bit the interesting, funny, and smart character that she was in the first work. She’s a bit older, perhaps a little more jaded about what has happened to her, but that can be chalked up to character growth and she seems to have done a lot of that in the time between stories about her. But in spite of all that she has been through, she’s still someone that that knows the difference between right and wrong and does everything she can to remember that.

The story doesn’t get Misty into any really hot erotic situations, though there are a few moments when she gets all worked up that I thought were really funny and cute at the same time. It’s more a story of the things that she has to deal with now that she is, after all, to others, a really sexy woman that they want to “get to know better.” This sets up a really unique moment of Misty riding a mechanical bull with a hidden secret that Misty isn’t going to soon forget. But it also puts her in the situation of being held captive by someone and then trying to find a way out. It’s during this part of the story that many questions about what she’ll do and what might happen come up. The way the work ends isn’t all that much of a surprise, considering Misty’s view of things and I’m glad that it wasn’t stereotypical, which it could have been very easily.

Many quirky, interesting, and at times, amusing characters dot the story, and it has the same humour that the first work had. The Professor is a source of much of that, as he was in the first book, and really I was smiling through the story when he appeared. It’s clear that Misty has picked up a lot of his mannerisms and humour as well which also makes the story better for that happening.

As much as I loved the first work in this series, the second just leaves something to be desired. The one thing that this work needs, more than anything else is a good editing. There are errors from the first page to the last and that took a lot of the enjoyment I had in finding another story about Misty away. They aren’t glaring errors or omissions by any means, but they just brought me to a halt every time I came across them and that shouldn’t have happened considering the work as a whole.

As such while it is a cute and fun story that I really liked, I just didn’t find I liked it as much as the first book. That’s a shame because the promise is there, and it comes very close to how much I enjoyed the first work in the series.

There are just too many tense, word and punctuation errors that bothered me. Misty isn’t quite the same character as well, which is a shame really. I think too much time has passed between the author writing the first work and this one. Perhaps they will see a way to write another story about Misty in a shorter period of time…