Succubi Image of the Week 393

A Review of Magic and Metaphors by Dou7g and Amanda Lash

A Review of Morning Star by Snow McNally 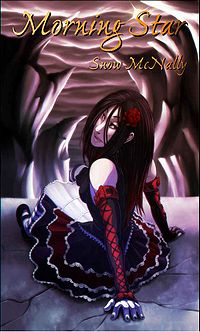 Another review today of a work that appeared so very long ago, told a wonderful story… And then vanished, for the most part. It’s a story that is quite a bit different than what you might expect, tells that story amazingly well, and offers so many questions that need to be answered.

But the promise in this work was never realized in a second promised work in the series. Something that has always bothered me to be honest. Because it’s that good a story.

Do you know who you are? Are you sure? And when the truth is thrust upon you, can you believe it, deal with it, and still be who you are inside of yourself?

All Alex wants is to feel loved, and not just used. Instead, he meets Rebecca, who seems to want nothing more than to torment him. Still, if you knew her ex, you’d understand. Somehow he finds himself dragged through a side of the world he never knew existed, and confronts all the things he never wanted to believe in. A romance of hate as much as love, featuring cosplay, zombies, cross-dressing, succubi, maids and a world-class heist, not to mention a love triangle with the very last person you’d ever want interested in your love life, let alone competing for a part in it.

Take a trip to Hell, which is a very different place to what you’d expect, and really not all that unpleasant.

Alex is an artist trying to make ends meet in his world. After breaking up with what he thought was his girlfriend, he comes into contact with Rebecca. In spite of her being odd, immensely so, Alex turns out to be the one person that she likes. And that could well be a real problem when who Alex is, what’s going on around him, and what it all means comes to pass.

The work as a whole is rather a complicated story, but that’s hidden away in moments that take Alex out of his comfort zone in a lot of ways. He learns a lot about the people he thought he knew and in that comes the start of learning about himself. And the one most responsible for that is Rebecca.

Rebecca is… different. She appears to be something of a Goth in a lot of ways but that hides who and what she really is. Alex’s discovery of that, what it means for his relationship with her, and more importantly, what their future might be is something memorable. It’s obvious that Rebecca is not exactly what she appears to be from the beginning of the work and what that means is quite a surprise when it all comes out, though there are hints from the beginning.

Possibly the most revealing, and for me, the one that sticks out for me the most is this passage:

She had a red corset, a tiny red miniskirt, black and red striped stockings and red heels, as well as red gloves to round it out. That wasn’t quite as distracting as the red devil horns on her head, or the long pointy tail sticking out from behind her. She looked incredibly sexy, a fact which I was trying my hardest to ignore, without much success.

She caught me looking, and made a face. It was somewhere between irritation and guilt, and I didn’t even want to begin thinking about what that meant. Clearly she hadn’t expected to see me. Well, I live here. Get over it.

“Nice horns,” I said casually as I cracked an egg over the frying pan. “Suits you.”

“Shut up,” she said, grabbing them and the headband they must’ve been attached to, and tossing them back into her room.

That one passage, more than any other. endeared Rebecca to me. As the story continued and the real truth about Alex came out, and she needed to make a choice, one that didn’t have a good outcome no matter what she decided to do, she made a choice.

I felt as if Rebecca was a Succubus or had a lot of Succubus in her, but in that choice came the moment when it was made clear who she was. That choice reflected on Alex as well and bound the two of them together in the most amazing way.

The work reads as a bit of a fantasy adventure mixed in with a mystery, which I thought worked very well. There isn’t much in the way of erotica seen, but the moment when Rebecca and Alex first share a kiss is one of the most amazing passages that I have read in some time.

There are a few very minor spelling mistakes in the work, but nothing that really took away from the amazing characters, story, and purpose it had. It comes to a satisfying conclusion as well, the moment that comes feels right and does right by Alex and Rebecca as well.

The thing is that the work ends on a cliff hanger in a lot of ways. Rebecca’s future is hinted at, as is Alex’s. There’s a promise of what their future will be, but we never see that unfold and I wish that it had been for all of the buildup that the work took in getting to that point.

It left me wanting. To this day… I still am.

I wish that this work was available as an eBook still, but it isn’t, you can only find it as a paperback now. That’s a shame because there’s so much told in this work that restricting it in that was just doesn’t do this author any sort of favour.

I wish that the second work would have appeared, mainly to see what happened to Rebecca, who and what she is now, and what that means to her and Alex going forwards. Lots of questions left unanswered, lots of story hinted at and suggested…

But we’ll never see any of that. I wish that wasn’t true.