The bride needs a better costume…

A Review of Demons and Diplomacy by Dou7g and Amanda Lash 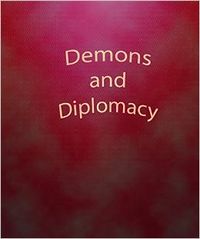 Demons and Diplomacy by Dou7g and Amanda Lash

Edmond has a problem, which soon brings Megan and Kendra back to deal with it. However, not all things are as they seem to be, and when things happen, as they do, sometimes all you can do is have a beer and think about it… or try to without hurting your brain.

In this installment the mage Megan and her succubus companion finds her kingdom invaded by a beautiful dark elf sorceress and her friends. Hijinx ensue.

Megan and Kendra return to find that Edmond has a problem, her name is Lorelei, and things go rapidly downhill from there. At least until two scholars find common ground, strike up a conversation and everyone else has little choice but to grin and bear it together.

The humour continues and is fully realized in how the characters think and act, but also how they talk to one another. There’s such an intelligent touch in the comedy which just works quite well I thought. Even in the midst of a battle, jokes are made, innuendo given and suggestions, some of which aren’t exactly useful, come out.

There is a lot going on in the story, both in plot and in the characters themselves which waves nicely from the previous work and points clearly at where the story will be going to. That’s not to say there isn’t conflict, for there is, and one of Megan’s actions in the past seems to have consequences in the here and now. How that will unfold I think will be a problem for her most of all.

Kendra, our succubus of the story, is more present in this work. She comes to confront Lorelei and in doing so she discovers that she isn’t, exactly, where she was once before. She has a challenge, a strong one, and then finds herself brushed aside and Megan having to face, again, a threat to herself. As this happens, Megan reflects on how she’s come to be where she is and I liked that for how she has to think, clearly, and not just “be” instead.

The one thing that I couldn’t quite work out was how Megan and Kendra went from where they were last seen to being back and dealing with Edmond’s problems. There’s some story missing there and I’d like to know how that happened exactly. There’s something substantial there that hasn’t been explained I think and I would like to know what that is.

There’s no erotica to speak of, really in this part of the series there couldn’t be, but there is a bit of Kendra being a succubus, if only to make someone faint away for a bit of a giggle which was cute. Edmond gets his due again, becomes so much more in this chapter as who he is, and what he knows, comes out and means something at last.

Again, a cute, funny and really enjoyable read. A lot more characters being developed, the story getting better as that happens. There is conflict but also there’s a grudging respect between the two groups and it’s going to be something to see how that works itself out.

At least it should, but with how things happen, that’s probably not going to be the easiest of things and there will be a twist in the tail.

Another solid, fun chapter in the series which brought with it some changes in the characters and how they relate to each other. Growth is good, there is a lot of that and more to come.

On Friday I will be reviewing the latest work in the series, which will bring me up to date with things… How our group will get through this mess will be interesting to see unfold…