A Review of Phantom’s Lust by E. M. Lindwood

A Review of Halloween Hotness: 3 Short Stories of Paranormal Lust by Saffron Bacchus 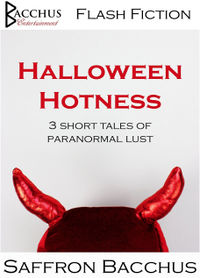 A review today of short anthology of three stories, one of which as a Succubus as a character. As always in cases like this, I will be reviewing the Succubus story in detail, give a rating, and then the collection as a whole.

It is an anthology of works by this author:

Succubus tells a story from the first person of a man meeting a woman at a party. She vanishes, he goes home, and then she appears there, reveals she is a Succubus and shows him what she can do.

It is a hot flash overall, but even though the majority of the story is taken up by the Succubus showing all of the things she can do with her lips, the characters have a certain appeal to them. They aren’t cardboard sex scene characters, but rather there’s a hint of them being more, stories behind them. But none of that really comes out.

The work goes from they meeting to the Succubus having her way with him and as the story is written from the first-person, there is a lot of telling about what he feels and thinks. For the Succubus there really isn’t anything told about her thoughts, only her needs, and how talented a Succubus she is. Perhaps more importantly, she isn’t a stereotypically evil, have to harm her partners kind of Succubus.

As much as I liked the story, and the Succubus herself, two things got in the way of that. One was we never learn the name of the Succubus, she never reveals that, but she does say clearly that she is one. What I thought was interesting over that point was the man in the story didn’t react to her being a Succubus, which really isn’t explained. The other thing that bothered me was that the story came to a close at a point where the Succubus promised to return.

The other two stories in the collection take on a similar theme, but they have female lead characters in them. In the first a woman makes a deal to be beautiful with the devil, who then returns to claim his due. In the other a woman goes on a date with a man, who she soon finds out is a werewolf and decides to take him home with her.

As in the case of Succubus, the characters are very good, the stories are hot flashes but with a good deal of background and story to them. The heat in the stories works well, and as a hot flash they are very good. But again, there is the problem that it feels like they were the opening chapters in longer stories. They both have good buildups towards the end of the story but at the end it is very anti-climatic. The endings leave something wanting and in that the story before is hurt by that.

I feel like the author needs to take the three works and turn them into separate, longer stories. The is more than enough character depth and story to be told in each of them and I think allowing the stories to come fully out would be something special to read. I certainly would want to see where these stories go and it shouldn’t be to a giant question mark of promising something more, but never getting there.

I’ll give Succubus four out of five pitchforks.

I’ll give this collected work three and a half out of five pitchforks.

The main thing that bothers me is the endings. They all end in a way that sounds like there is more to the story to be told and it isn’t. That’s not to say that as hot flashes each of the stories isn’t good, because really they are. It’s just that after telling such good stories with such interesting characters coming to a complete halt just when the flashes are about to turn into fully fledged stories doesn’t seem right.