A Review of A Taste for Power by Kay Michaels 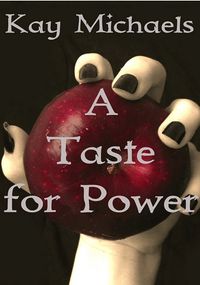 A Taste for Power by Kay Michaels

The second of two reviews of works by Kay Michaels which revolve around a Succubus named Carmen. You can find the first review of the book Just a Bite here on the Tale.

The question of who Carmen the Succubus is was, for the most part, unanswered in the first part of this series. In the second Carmen speaks her mind and with it comes some truths that she didn’t expect either…

Carmen is a succubus. She had a life of excess where she ruled… but now she’s just the hottest thing in a lowly dirt mall. She wants to rebuild; she wants to be back in control. But first, she’ll have to learn about her boyfriend’s past and how it will affect her plans.

Carmen once lived like a Queen. But then everything went to hell and she found herself the lowest of the lows. She found her way out of that hell and now lives in shopping mall purgatory. But even in the darkest places there can be seen angels…

This second part of the series is seen from Carmen, who is the Succubus of the series, viewpoint. It’s interesting to see her thoughts about the people around her, her way of speaking and thinking is rather unique and in it you can see the echoes of her past power clearly. At times she speaks of Simon in language that seems to put him down, but in truth it is a front, a barrier to keep her true feelings out of the way as much as she can.

Carmen wants to be in control, the one that tells others what to do as she did before. But where she is at the moment, who she is with, gives her little choice but to at least grudgingly go along with what Simon wants even while she thinks about “nudging him” or “being the one behind the throne” as she thinks of it.

This all changes when Simon tells her… everything. All of the things that his once girlfriend, another Succubus, had done to him, how close he had come to ending his own life, and most of all, the pain and suffering that he dealt with and deals with every moment of his life. At that moment, and it is a strikingly powerful one, Carmen’s attitude changes and the truth that she held close she finally releases.

Simon had admitted that he loved Carmen in the first work and it is a touching moment when, in the passions between them, when Carmen calls Simon “love”. That, for me, was a special thing and it meant more.  The connections that were starting in the first book come into sharp focus in this work and they are more of a couple, two people that care and love in their own way, than they were in the first. It’s a nice progression in the story which gives a chance for character development for the two of them that I thought was amazingly well done.

The sexual tension between the two is a bit stronger in this work than the first, but there is also a release, a setting of understanding, and as well, a mutual moment where each knows, exactly, what drives the other in the relationship. In that moment, the story turns a corner and for Simon that also changes how he sees himself, what he thinks of, and knows of Carmen, and in that comes a decision and it is an important one.

With all of the past spoken of, their future talked about, once again Simon’s father hovers over the two like a dark angel waiting to strike… and he doesn’t. The threat from the first book is still there, very little time seems to have passed and in that nothing much has changed and the worries are still there.

Which brings up the question of the next book in the series, which has to happen sometime to tie up the loose ends, end the conflict that looms with Simon’s father, and bring the story towards, if not a conclusion, than at least to move the relationship and story ahead more than it did here. While the story being told from Carmen’s view was really telling, the story sometimes felt like it was going over things that had been talked about before.

But in that repetition, came an understanding about Carmen that wasn’t there before and that made this work every bit as strong a piece of writing as the first. Which only made me want to see where this story goes from here more…

It’s good to have a series where the story is wonderful, the characters strong, and the moments ones that say with you when the last page is turned… The hope is what comes next is all that I wish it to be…