A Review of Hell On Heels!: She’s The Devils Daughter Looking To Collect! by Michael Uva

A costume this expensive really has to look better than this

A Review of Dream Girl by Jeremy D. Hill 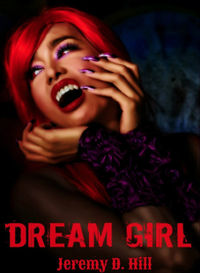 It is said that our past influences our present and, eventually, defines our future. There are some pasts that cannot be forgotten, no matter how much we try.

And, sometimes, there is a part of our past that we never really understand, but sense. When that part returns to reveal itself… What happens then?

Wanna be rock ‘n’ roll star Wes Warrington has a troubled past involving the occult and institutionalization. Now touring with his band can he put his past behind him and find his dream girl? And when he does, will she be what she seems to be?

Wes has lived through a life that really no one can ever understand. Pain, suffering, a family that abused and used him, and a girl in his past that went over the edge because she wanted him. Surviving all that confronted him, he manages to continue on in a band… but on this night… the dream girl of the past he thought he knew will be revealed to be so very real.

Overall, this work is mainly about Wes and his past. There is a lot of detail in that past, all of the bad things and so very little good, that it really, at least for me, was hard to get through. It shapes his personality but more importantly, there is one moment in his life that he did not understand at that time.

Being involved with a “good girl” who involves him with summoning a Succubus, then blames him for everything that happened, would be have been the end of the story for a lot of characters. But Wes survives, moves on, and tries to live his life. But the thing is, he remembers seeing, vaguely, a beautiful woman before things went wrong. And he thinks of her often, making her more and more real in his mind.

When the story comes to the present time for Wes, he meets an odd woman. She captivates him, gains his attention, and for the barest of instants there is the sign that she is a Succubus. One with a very familiar name.

That would have been an interesting story to read but it is a very few short pages towards the end of the work and there isn’t really a lot told of who the Succubus is, what she is, or her character other than she has been looking for Wes and wants him to be “complete”. There are little touches of her wings, of her being, that are told, but her character, her personality is shaded and shadowed… And honestly I would have liked to know as much about her as we learn about Wes.

There is a touch of erotica in this work, but it is very little as the main point of the work tends towards the macabre and horrific. While as a whole the story is an interesting one, I’m not so sure that the work needed to have as much pain and suffering for Wes in it as happened.

The ending was not quite as satisfying as I would have liked, but in the framework of the story it made complete sense. The moments after the climax seemed rushed and unfocused and that was a shame.

The writing had but two points were a word error or misuse of a word happened, but otherwise the writing is quite good and descriptive. The character of Wes and that of the other band members is well told and shown, but, as I have said, the Succubus appears to be mainly about her physical aspects and not really about her personality… I think the story would have been better if that part of the story had been revealed…

There quite a lot about Wes, his life, and the dream that he sees of the girl that he wants to love. Personally I would have liked to know as much about the girl of his dreams than we do…