A Review of The Visitor by Daria Savoy

The Other Side (A Companion Piece to “Traveling”) by James

A Review of The High Priestess’ Corruption by Xavier Girbes 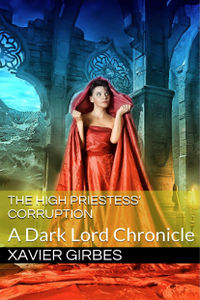 It is getting to the story, to find where it starts and then, hopefully in time, where it concludes that there can be something found. But when the opening is lost within the erotica, leaving the story not fully realized that something is missing.

Gabriella felt the return of the Dark Lord every night in her dreams. As the High Priestess of the citadel, it was her job to stand as the living embodiment of purity, to remain chaste in the service of The Light and protect her people.

But as he drew closer and closer to her, she could sense his effect on the land, the normally good and chaste people of the citadel had grown dark and depraved. She had even caught her noble attendant Sir Francis, once the embodiment of nobility and loyalty, watching her lewdly. Now with the Dark Lord at the citadel gates, Gabriella fights to keep him at bay, while also fighting against her growing desire to give herself to him.

A story of the fall of the light as the darkness surrounds the last of the light. A moment when the balance is tipped, things change, and what once was, becomes something other than what should be.

The work reads very much like the opening chapter to a novel, having the setting, the characters and then the theme of the work clearly told. As such, while there is some background given, then followed by the events told, it isn’t quite all that detailed, nor is a lot of time spent in the story itself. By comparison, the erotica within the work takes up most of the story, and through that things change.

But there isn’t really a lot of time spent on explaining why the events unfold as they do. The work seems to want to get to the erotica as quickly as possible, and find that heat to move the story onwards. There is a bit of mind control, really there’s more than a bit and it leads to the heat of the work. There are some transformations, a bit of character change in form and personality as well.

In that comes, for but an instant, the appearance of two succubi who come to be through two characters being transformed. It is, as a whole, only hinted at, the moment is quickly passed by and then the characters fall into the background.

The work is fantasy, a bit dark, but not too much so. It is short, a little lost in telling a story at some points as well. There is heat, though that in itself isn’t enough to carry the story either. It reads too thin for the first book of a series and needed to be longer and telling more of a story. Seeing as, of this review, there has not been another work in the series, that is the larger shame as there is a story here to tell. But it just isn’t as much as it should be.

As the outline to a longer work, or as the opening chapter to a novel, this tells quite an interesting story. The problem is that the series didn’t continue, the story is not fully told and that is the greater shame.