Succubi Image of the Week 391

A Review of Just a Bite by Kay Michaels

A Review of Amphora: The Gossamer Witch by Lilith Lo 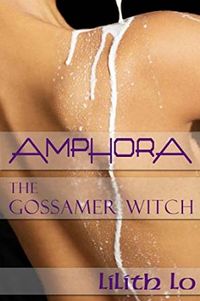 One of the powers of a Succubus is that of being able to change the perceptions of others. To make them see, hear, feel and, eventually, believe that which is not the truth. To draw them into a web where the Succubus gains what she needs, however she can.

This is how, for the most part, the more evil, or expected Succubi act. They have one purpose, one desire and need. The thing is that the same can be said of those that they are attracted to. Their desires are just as apt to doom them in the same way as the Succubus herself can be… even if she cannot see that for herself.

Living under the frightful lust of the Night Witch, the men and women of Gobekli Tepe have learned to fear her cry. One man, Liam, lives in denial of her threat – forever seeing the Night Witch as a homespun myth. Unwittingly, with lust for his lady Anada, he sets the Night Witch into motion yet again.

Hunted by her far reaching lust, will Liam escape by dampening her spirits before the sun begins to rise? Or, with his ignorance, will he give the Gossamer Witch what she desires the most?

Liam finds that his lust for another has brought the attentions of the Night Witch. A chase made, a love held and within the moments that come, a choice made that speaks volumes of all involved… forever.

The two main characters of this work, Liam and Amphora have a battle of wills, desires, truths and lies which ensnares both characters into a battle which is both stunningly told and at the same time leaves one wishing there was more than what is told.

The work does not dwell long on setting up the story, moving quite quickly into Liam encountering Amphora and the two dancing around each other with words and actions. I found that quite captivating in that Amphora, though she isn’t explicitly said to be a Succubus, has many of the aspects, powers, and, if not exactly charm, then seductiveness of one. There are twists in words, actions, even in the creation of things to tempt, tease, confuse and concern Liam as the story goes onwards.

There is a very slow and deliberate path which Liam is placed on by Amphora. As they move around the point of their confrontation, there is a very subtle shift in the story that I think reflected well on how Amphora’s powers held sway and what she was capable of. The telling of the story from Liam’s perceptions worked well and didn’t feel wrong or out of place. There are moments when Amphora’s abilities to shift reality around Liam come to the fore, events transpire and there are points at which reality and the fantasy created are indistinguishable from one another.

The work, as a whole, does not focus on erotica very much, but there are little moments, hints, and in being so it allows for some flashes of heat that add to the story and not take away from it. The work does focus on what can only really be described as a mind game that Amphora plays with Liam towards her goal, no matter the cost along the way.

Very strong characters, a setting well told and played within, the work tells a captivating story. However there are moments when some more time spent in the “why” rather than the “how” would have been nice to see. The ending of the work is a bit expected, considering all of the hints that are placed throughout the story. It is a bit abrupt, a little short and in being so it takes a lot of the building up of the work and casts it aside for a single page which reveals the truth untold. I had expected more of an ending from the story to that point and not having that did leave me wanting.

Well written, very atmospheric and powerful in nature and tone. Somewhat disappointing in how the work ends for all of the building up that proceeds it. Perhaps there is more to be told, why things are as they are and, possibly, an ending that is a bit more full that this one was.