A Review of the Small Town Succubus series by Ruby Wildes 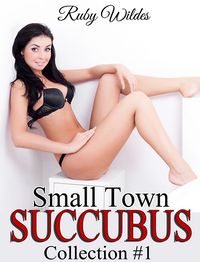 A review on the Tale today of a lovely little series that tells the story of a succubus moving into a small town and some of the things… and people… that she gets up to. I like cute, funny and sexy stories very much, and it isn’t often that an author manages to make that theme work well.

Make her seductive, intelligent, and most of all, have her know the difference between right and wrong. You can have all of the mind control, succubus powers, and more you like, but if she isn’t capable of knowing that doing something incredibly stupid is a bad idea, then what is the point of the rest of the story?

She doesn’t need to be a schemer, nor does she need to be the type of character that just uses and abuses others. Call it a touch of humanity if you’d like. I think that matters.

There are several works in the series which are available separately and as a collection:

The book series summary is:

A collection of the first three succubus stories:

A small town has a new arrival. Her name is Vanessa and everyone is talking about her. She finds a job as a waitress at the local diner, meets some of the male population… and their members… She’s simply someone that can take your breath away… and something more when you fall into the arms of a Succubus.

I’ve always enjoyed stories about Succubi that are not stereotypical. I prefer the stories where the Succubus is intelligent, uses her mind, and isn’t simply a sex toy for the men to play with. In this series it’s quite clear that Vanessa, the Succubus of the series, is very much like… well… Like the Succubi of the Realm.

She’s very smart, sexy, seductive and while that is played up a bit in the course of the story, it is also very clear that she is very much in control of herself and the others that she becomes intimate with. Vanessa has some lovely aspects to her personalty in that she has the right touch of voice, mannerisms, and suggestive nature. She doesn’t simply grab someone, pull them into an embrace and then feel upon them. She has a plan, follows it, allows the sexual tension to build up slowly and tantalizing, then, at the right moment she turns up her true nature.

The way Vanessa’s powers are told, how they appear to work, has some wonderfully erotic mind control, or rather hypnotism and that’s something that isn’t played upon enough i think in most Succubus stories. She is quite Domme when she is controlling her “prey” and I use that word with some hesitation. As I noted she isn’t stupid in her methods and what I really liked was that, in the course of telling about her past, a good explanation is given about why she feeds as she does, what changes come over her as she does, and with that where her focus is.

It is never said if Vanessa has horns or a tail, but she has a very interesting change in her eyes when she is using her powers as a Succubus and that worked really well. It also works really well that the model on the cover of the series, her looks, are very close to that within the pages of the stories which puts her quite firmly in one’s thoughts as you read.

The erotica is very well done, hot at the right places, sexy when it needs to be, when it should be. The author paints the story as one long simmering build up of sexual tension in those around Vanessa which climaxes with her doing all of the nasty and sexy things that the one she is with has been thinking about since they first met her.

That building tension, the confusion that wraps Vanessa’s target around her little finger and makes them do anything she wants is what really sets this work apart. Vanessa is one of the Succubi that I really do like and one that I was very pleased to discover.

As wonderful as the series is, I think it could have been a little longer. Perhaps more about Vanessa’s past would be nice as there are a lot of questions unanswered. There are, I am sure, a lot more stories to tell in this universe and I do hope there will be more to see from this author in the future. Vanessa’s story is far from finished…

I’ll give the series as a whole four and a half out of five pitchforks.

A series with a Succubus that isn’t stereotypical, is seductive, and uses her abilities to their upmost. A touch of mystery surrounds her, but then all of the best Succubi have that in them. The pleasure is in discovering what the mystery is…