A Review of the Transformed series by Sylvia Parker 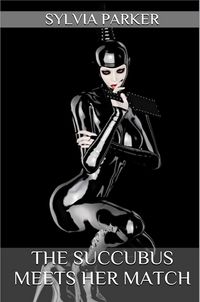 The Succubus Meets Her Match by Sylvia Parker

A review today on the Tale of a series that seems to have a Succubus as one of the characters, but in the end I was wondering where she vanished to. Assuming that having the word Succubus in the title of a work would mean that a Succubus might be a major character in it is, I think, a fair assumption to make.

The problem becomes when the Succubus really doesn’t appear much, isn’t much of a character, and the stories really have no real reason for her to be part of them. Other than to have a reason for some erotica that seems more from a comic book than anything else. That’s a rather large thing to deal with…

The following summary lays out the series as a whole, it is from the first work in the series:

An assassin by trade, Clive Hastings waits with his back pressed against the door – a high profile mark on the other side. Being paid a generous sum for the job, he is set to do what he does best. But things take a turn for the unexpected as the target has a guest – and a dangerous one at that.

The infamous succubus Ubana, a demon from another realm, witnesses the assassination of Clive’s target. She doesn’t seem to mind, preferring instead on attempting to seduce the hired killer. But Clive knows better than to sleep with a succubus. He pushes her away, choosing instead to loot the man’s belongings.

But when he finds a strange amulet tucked away inside his mark’s bag, Clive is transformed into something more than human. He becomes a monster, and in his new form Ubana tempts him with her body once again. But even someone of her reputation is unprepared for the special powers the amulet has bestowed upon Clive, as he experiments with his new powers on such a willing victim.

As a whole the series strikes me as being very “superhero comic book” in theme, plots and characters. The events of the series are very over the top and at a certain point instead of reading, I began to skim and that is never a good sign.

The events of the series tend towards themes that one might find in a B-movie in a lot of ways. Stereotypical evil, plots, almost heroes, victims and so forth. It became hard to read when the storyline just created monster erotica for the sake of doing so. By the same token, the erotica itself was so much over the top, violent, and, as a whole, not at all interesting to me. I think that the main problem was a few good ideas tied together with a series of vignettes and they didn’t have the connectivity needed to make that work well.

As for the succubus of the series, Ubana, she is stereotypically evil and demonic with a need for sex that bordered on the silly. The few scenes she appeared in were means towards an end for several characters, quite literally. To try and understand her drive, what she wants, can be best said to be a need for violent sex with anyone and everyone. Latex not being optional for her at least.

The writing was a bit difficult to follow and I think major editing would be needed to bring this series to something approaching readability. Less cartoonish characterizations and events and more of a focus to the series would be a good thing. If I think about the story of the series and ignore the erotic aspects of it, it actually reads better in that the series turns into a mystery to be solved. Focus on the core story, give the characters a chance to be more than cardboard, and I think there is something good in this series. But as it is right now, I just didn’t enjoy it at all.

I give the series as a whole one and a half pitchforks out of five.

Difficult to read at times, the plot seemed lost from the beginning and with it much of any character development there might have been. While there was a hint of something interesting at the beginning, the series lost its way and me with it. I don’t think that needed to be, but it did and more the shame for that.