A Review of Begone, Demon Conjured by Unnatural Lusts! by Tasha Starr

Not sure about Evil Twin, more like Trashy Twin 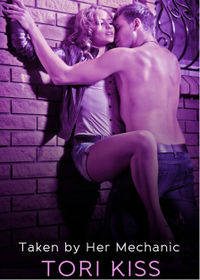 Taken by Her Mechanic by Tori Kiss

Some time ago I reviewed a work by an author that I thought had quite a lot of promise. It told the story of a Succubus encountering her one unexpectedly. You can find that review on the Tale here. Imagine my surprise when a work with a similar title, published under a different author’s name, appeared. Could it be the same story? Could it possibly? The answer to that question is, very much, yes.

Could I hope that the author had improved the story? Added to it? Done something more than they had in the original work?

The answer to that question is… sort of.

She’s a succubus who needs her fix. Only a man can fill her with the power she needs.

She finds him. He’s a mechanic. Or… is he something more? This succubus is about to find out.

When reading this version of the original story, there isn’t any changes to the plot, the characters or anything substantial. I will note that the author did edit a lot of the errors in spelling and grammar that I noticed, which does improve the story.

As I noted in my original review, there is story to be savoured, there are two characters that play off each other so very well that the attraction between them is perfectly written. The situation is a little forced at the beginning, but once the faltering start is past then the real story and the heat arrive.

Agjalel, the Succubus of this story, amazingly enough, has a tail. It’s not exactly what I expected it to be, but I did find it a rather unique take on the Succubi. I also thought that the mythos around her was well done and I wanted to know more about Lovers and the world they live in. While that was what caught me and held me in the story, it also was how perfectly Succubus-like Agjalel acted, what she discovered about herself and then Vincent added much more to that pleasure.

We really don’t learn a lot about Vincent, and to me that’s a shame because so many ideas, hints, and suggestions about who and what he is appear in the work. When the climax of the story comes, for both of them, what could have happened, and I expected the ending to be a sad one for all that was hinted at, thankfully did not. But the ending came too soon.

The writing is wonderful, emotional, and draws you into the story. I found myself wanting the hopes of Agjalel about Vincent to be true, But it wasn’t only that. What really made this story work for me is that there is the connection between the two, the choice that Agjalel must make, and what that really means. But then the story ends and… and I was left wanting for more. Regretfully that never came from this author, only this reissue of the story and that, honestly, is a sad thing.

There is more to tell about Agjalel and Vincent. A lot more. It is a shame that promise, that heat, ends where it does.