A Review of Begone, Demon Conjured by Unnatural Lusts! by Tasha Starr 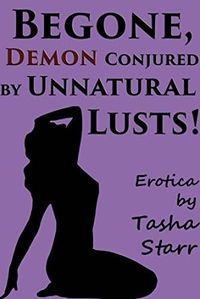 An incubus-themed work for review this time on the Tale. Sometimes I wonder about the book summaries that authors create. On occasion they aren’t exactly… correct. By that I mean one reads the summary, expects one thing as a result, but then something completely different unfolds.

That’s not always a bad thing, sometimes it makes the ending more surprising, better, acceptable. But then comes the question of why exactly the work is so short and ends on a cliffhanger when it easily could have continued onwards, if only a bit further, for some truths to be revealed?

A creature intent on ravishing me in the night stalks my house and arouses my passions. I remain unsure whether experiencing him will be the end of me or the beginning of ecstasy. The demonic Incubus himself has a secret plan as well. Why has he not yet forced himself on me, as is in his power? I search for answers, even as I futilely attempt to resist the allure of this creature of the night. What will I have to undertake to finally find resolution–and release!

Haunted by a demon, the reasons way not known, a woman tries to find answers and when she does, makes a fateful decision. In doing so, the incubus finds himself both summoned and trapped and she taken and held. But which is which?

The work is written in the first person, which does work, if feeling a bit out of sorts at times. That’s more in how the main character, who is never named, deals with the events she is in the midst of, but also in how so much of her thoughts and plans are half-hidden away. During the story, she is told that she is being visited by an incubus and of its plans, but really her reaction simply happens and there’s no real sense to that in the moment. As the story unfolds, eventually coming to the conclusion, her actions, and admissions, just didn’t quite fit with the rest of what she did, felt, and thought.

The incubus isn’t named as well, and remains as much as mystery as the main character herself. He speaks little, hides himself, and when he does appear, there isn’t much in the way of a connection between him and the main character. There’s just something odd about him, and even when why, and what, he intends to do is known in the story, it doesn’t really make a difference overall.

There is very little erotica in this work, mainly at the end, and a bit of an interlude at the beginning. There is a story, and really, when the twist comes at the end, I found myself sighing a little and wondering why the author ended the work where they did. The final page, what it reveals about the incubus and the main character, sets up quite an interesting story to take forwards from that point.

I can see many possibilities here, some of which I think could be really delicious if used. But with this being such a short work, there needs to be more development, more meaning to be found going forwards. There’s a mystery here, in a lot of ways, that is just touched upon, but isn’t really taken anywhere. I really wish it had been, that the work was at least twice as long as it is, and that more time was spent to learn about the characters and who they are.

There is really very little dialogue, this mainly being monologue more than anything else. When words are spoken, they are a little bit… odd. Speaking some of that out loud the words don’t come out as being smooth or “right”. There’s an oddity in them.

As the basis, or outline, of a longer work, this has promise, but as a story, even a short one, if needs to be more than it is. The framework is there, there is story to be told. There are two characters which can be interesting, but don’t come out fully before the climax comes, in more than one way, and the work comes to a close.

There is something here, it simply didn’t come out to play.