A Review of The Price of Changing by Abigail Pierce

A Review of Witch Lover by Eden Redd 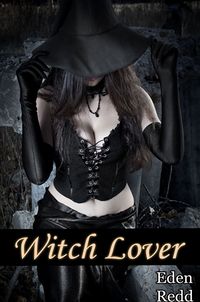 There are some aspects of the Succubus legend that aren’t really made the focus of many works about them. The rather significant part of the legend says that Succubi mate with men in order to take from them what they need to create new Succubi and Incubi in women elsewhere.

Taking that legend, and putting a new twist into it made for a story that I rather liked a lot. Save for one small, little thing… The Succubus herself should have been more than a hint, a mystery, and a bit more involved in the story more than she was.

Eva Morgan is a witch trying to hone her craft. She exiled herself from civilization to devote to her studies. She has spent nearly a year away from all human contact as she studied the dark arts in peace and quiet.

All that changed when she received an urgent call from a childhood friend. Daniel races to her remote location. He has a mysterious bite and wild urges plaguing his every thought. Daniel knows that Eva is the only one he can trust to help him.

Eva breaks her exile to sets about to help her long time friend. But during the process, old feelings bubble to the surface. Eva wonders if she can keep her true feelings aside from the stricken Daniel. As the clock ticks, Eva must decide if she will keep her feelings to herself or expose them to her long time friend who is fighting a monstrous lustful poison in his veins.

Eva is learning to be a witch, a rather powerful one, and in order to do so she has isolated herself from her family, friends, and all that she knew. Daniel calls, asking for help, and Eva cannot turn away from him. She discovers that a Succubus has her hooks in Daniel, and Eva knows exactly why that is. The question is, does she give the Succubus what she wants, and in doing so, do Eva and Daniel possess what they both need?

Eva is a fascinating story on her own. The story of her past, how she learned to be a witch, what she has grown into, all of that makes for captivating reading and I enjoyed that. I liked the strength of her character, her will, and when things come to the moment where she must make a decision, her single-mindedness in that. She is a very strong character and that served to make her narration of the story, as it is told mainly from her point of view, really well done.

Daniel is almost as good a character in that his emotions are there in the open, he appreciates Eva for who she is and is not afraid of what she is. But it is a little difficult at times to separate the real Daniel from the Daniel possessed by a Succubus. After the resolution of the story arrives, it’s very clear what Daniel’s personality is, and the connections between himself and Eva are just beautiful and I loved them dearly.

The Succubus herself is, for the most part, not seen in this work, though her effect on both Daniel and Eva are very clearly told. It’s a bit difficult to see what she wants as the story begins, but when Eva finds the answers, it makes a lot of sense and I liked where that led the story to. But the main problem for me was that through most of the story the Succubus is never seen, she is never given a name, and she just… isn’t there really. At the very end of the work she does appear, black horns and tail, which made me smile, and that was a mental picture that I rather enjoyed thinking about.

The thing is, that moment passes quickly, she vanishes once more and then the story comes to a close. With all of the build up, the story telling, the moments of passion and erotica that come before the ending, it felt a bit… rushed. It wasn’t that the conclusion of the story didn’t work, it did and well. It was that the story left me wanting to know what happens next, both for Eva and Daniel, but also for the Succubus herself.

The work is written very well, lovely characters, scenes, moments and passions. The erotica isn’t over the top or silly in nature, which for how the story is told, what it means to both Eva and Daniel, makes that very important. Enjoyed very much and, in a way, spoke to me quite deeply in what the succubus desired most of all and her reactions at the end of the story.