A Review of Witch Lover by Eden Redd

A Review of The Price of Changing by Abigail Pierce 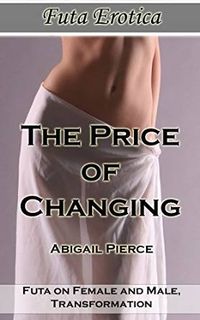 The Price of Changing by Abigail Pierce

One of the themes that is booming more popular of late is to combine Succubi and Incubi with other, wider fetishes. Notably among these are stories where a character is, or is transformed, into a futa or some description.

Overall this usually leads to a work that has a lot of sex it in, not much in the way of story, and when that happens I really don’t care for stories like that much. However, sometimes there is a single line of text which catches my attention and I wonder if the story will do something with it. And then there are times when I wonder what was the point of the Incubus being in the story in the first place?

Erica always wanted a cock. So when an Incubus offers to give her one, of course she accepts!

However, there is a price to be paid, if she wants the cock to remain permanently: she needs to fuck both a man and a woman with her new cock.

Her new dick is irresistible, though, so it is easier than she thought.

Erica has always had one dream. An incubus appears, gives her what she wants, and then puts her on a quest to keep it. Erica finds her dream, as reality, is everything she wanted and more.

Overall this work is primarily one about futas, transformation, a bit of mind control and a series of short hot flashes. There really isn’t a lot of story, the work almost immediately dives into erotica, though it does break things up with a little bit of story here and there.

There is an incubus to be found, making a couple of appearances, but overall he is a means to Erica’s transformation and putting her on a quest. Beyond that, there is not all that much known about him, least of which is his name. However, and this is the part that I found interesting, he does note that succubi and incubi, at least in this universe, do not take souls and I did like that part of his character.

But there wasn’t really much else about him to be told. His entire appearance in the work comes to perhaps two pages, if that. So I’m not sure what the point was for him to be in the work, save for bringing the story into focus. After that, the incubus isn’t part of the story again until a very short appearance at the end.

The rest of the work is Erica learning what her new abilities are, using them on two people in her office, and enjoying that. The erotica itself is a bit bland at times, I did like the mind control aspect, but overall it was just two very quick encounters that ended about as quickly as they started.

The writing is a little plain, it certainly needs an editing for the mistakes that cropped up in it. For example calling a character “miss Rye” instead of “Miss Rye” for one. There are some spelling mistakes, the dialog is very odd and stilted at times and it just made for a very difficult to read piece of erotica.

The work is more erotica than story, and it needed to have more of a balance overall. It is short, which is a problem, but even so the questions sit there by the end of the story unanswered. The main one being… why? Why did the incubus do this? What does he get out of it and why Erica?

The ending itself was disappointing in that it was a bit rote, a little expected, and as such that didn’t sit right with me. There’s a story in this somewhere, but it didn’t come out as much as the characters did.

I’ll give this two pitchforks out of five.

Not an incubus story, not really, the futa is a bit expected and with the writing not carrying the work, that makes for a difficult read with little heat to enjoy.