A Review of Slave for the Incubus: Catholic Schoolgirls Sinful Journey Into Lust by Arcadia Black

A Review of Succubimbo by Skye Maze 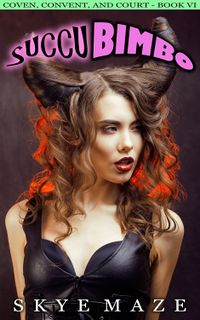 There are, I have to admit, some ideas which make me wince a bit. I really have never quite liked the idea of mixing bimbos and Succubi together, mainly because it just doesn’t quite fit my own view of Succubi.

However, that doesn’t mean that an author can’t write something that might be more than I expect it to be. Today’s review is of the sixth work in an ongoing series, but according to the author it can be read as a stand alone work. The title, I will admit made me wince a bit, and I didn’t expect much really from the work as a whole… But I could be surprised… It’s a shame that I really wasn’t.

Having escaped from the clutches of six demon mistresses, Kai returns to save his friends. Used up and dominated in the dungeon, his Coven witches have lost all hope – but when Kai reveals the huge secret in his pocket, their infernal captors will do anything for a taste. Before they know it, these sexy succubi might be submitting in ways they never thought they would – or could.

There is a hidden trap which catches succubi unaware, and Kai has the means to use the trap and gain his freedom. If that means taking some succubi as his playthings, then that is what he will have to do.

The author made the note that this work could be read as a stand alone story and I have to say that really it can’t be. There is story preceding this work that I think would have made a difference for how the work read. but it isn’t in this work. The main focus in this work is the submission of a group of succubi, focused on how that unfolds and what happens through it all.

The work becomes more confusing when one succubi after the next has their name changed… and it is the same name. While I understand that is due to the spell they are under, and it is core to how the story unfolds, it just became irritating. While the main character does given them slightly different names, it doesn’t quite work in the end and needing to read the descriptions of each of the succubi to figure out which was being talked about bothered me.

There really isn’t much plot to speak of, the work drives directly into the erotica, and in doing so that makes the suggestion of this being a stand alone story a bit hard to accept. There’s no real explanation to why things are happening as they are, who the characters are, and how they all wound up in the situation they find themselves in.

There was a summary of the preceding works in the series at the end and that filled in a lot of the blanks, but that shouldn’t have been needed. Taking a few more pages to bring the story up to speed would have been nice. Having more story would have been as well.

As well, the title of the work gives a certain expectation to what the story will have as a theme. Now, I will admit that I was looking for a succubus who was a bit of a bimbo, acted like one and so on. That didn’t happen in this work at all. Yes, there is a lot of demand for bimbo themed stories and I am sure that an author could tell a good one with a succubus who was a bit of an airhead, but this wasn’t it.

The work is a hot flash, not having a lot else within it and I’m not sure if I want to go back and read the preceding works in the series or follow it forwards. I don’t like abuse all that much, and some of the scenes were pushing the envelope for me. Some will enjoy this work, I just couldn’t find my way into the heat past the suffering.

Better to read the proceeding works and know where the story came from and where it is going than to just take this story on its own merits. Not enough heat to sustain the work and not enough story to make it more than the flash it is.