Succubi Image of the Week 389

A Review of Succubimbo by Skye Maze

A Review of Slave for the Incubus: Catholic Schoolgirls Sinful Journey Into Lust by Arcadia Black 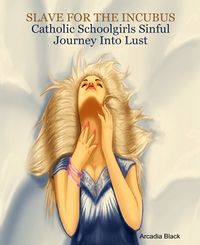 Slave for the Incubus: Catholic Schoolgirls Sinful Journey Into Lust by Arcadia Black

A story with an Incubus at the core this time on the Tale. Sometimes the title of a story tells you exactly what a book is going to be about. You might hope it is something more than what you expect it to be, you might expect that from the beginning of the story things could be more story than sex.

Sometimes it is. Sometimes it isn’t. Then you wonder why it went in the direction that it did for a long time afterwards… And why it had to be just so stereotypical…

Three teenage catholic schoolgirls get more than they bargained for when they inadvertently summon a sadistic Incubus of sexual lust and perversion while attempting a prank.The Incubus and his hyper-sexual Gargoyles drag them into a dark world of eroticism and hot lust from which they cannot escape.

Abigail and her friends find a book in the library and after some consideration, decide to perform the summoning it tells of as a joke. The problem is that they do summon an Incubus that had his way with them all before turning them loose on the school they attend.

There’s little in the way of story that doesn’t directly lead to some sort of sexual encounter and with that comes a repetition of assorted sexual innuendo, the students “making out” and assuming they are not being seen, but they are, and silliness continues from that point onwards. Even when there is some time given to the reasons to why the students are reading the book they find, it is mixed with what is really personalities that are just this side of vapid. Which, for me, was a complete turn off well before the work turned towards the Incubus appearing.

The latter part of the work then returns to the students being in school and having to obey the will of their “Master” which results in yet another stereotypical sex scene with the staff of school they attend and then other students as well. The story ends on a note which obviously seems to be meant to continue in another work.

As a whole, this sort of work does nothing for me at all. The work reads as very bland with an attempt at shock hot flashes mixed with some tentacle and monster erotica to give it some flavour. There is a story somewhere in all of this, but finding it means getting through all else which had no interest for me at all.

There was some promise at the beginning that might have kept my attention, but I just found that things were too formulaic for my tastes. Too many stereotypes and fantasies that didn’t have any heat in them for me at least. Perhaps for others, but I couldn’t find it. Just disappointed with the work as a whole and I won’t be reading further if there is a second work.