A Review of A Violent Seduction by Kiki Howell

A Day Off By TeraS

A Review of Succubus by Miss Irene Clearmont 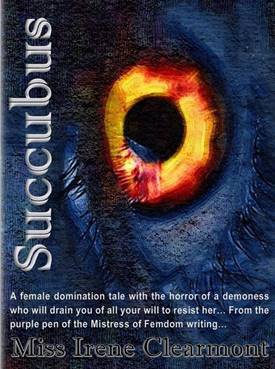 There are very few novels which have history at their core. It is the telling of that history, not just in the characters, but the world itself, that is what separates them from all else. To be able to weave a story within which there is something special, something unique, that is a gift, a rare one to find.

I had encountered a work simply titled Succubus written by Miss Irene Clearmont, but at the time that it came to my attention it seemed that the opportunity to see what the story was not likely to happen. I could not find a copy, and it seemed as if the work would remain a mystery to me.

Recently, the author contacted me, the ways of the internet are a mysterious thing really, and she gifted a copy of her work for which I am so very grateful. I had hoped for a story with substance, with purpose. Characters that were captivating and drew me into the story, not letting go. I am so very pleased to say, beyond a doubt, that the author succeeded in this.

With “Succubus”, the glorious Miss Irene gives us the tale of a beauty with roots dating back to the time of Carthage – and a need to control, dominate and destroy her male victims that is equally as old.

Male victims whose essence she takes during sex ensures she maintains her youth and beauty.

The world contains mysteries and questions beyond understanding. The path of Elspeth is one that has been touched by her for centuries uncountable. A need within growing stronger, a means being searched for. But along with that comes another searching for something else which will draw them both and other together into fates unknown.

Simply the most amazing piece of Succubus literature that I have read this year. The detail in the story, the presence of the characters is just exquisite. The work is not a simple piece of erotica by any means, there is so much more to be seen within the pages. It is complex, gripping, and once begun simply cannot be put down.

The main character, Elspeth, passes along a journey from the far past to the present day and as that unfolds history is seen through her eyes in one moment, but at the next, her own need and desire pushes at the limits. The story tells of her struggle with herself on the one moment, but in the next her deeply rooted need to dominate, control, and survive.

The myths of Succubi are mixed with that of Incubi and the Lamia among others. There are some wonderfully complex myths that come into play over the course of the story and this brings Elspeth’s journey into sharpen focus.

Elspeth herself changes with time, becoming kind of a chameleon as need be in order to survive. Along the way we see her encounter her prey and then see what her belief within drives her to do. There is a good deal of dominance in her character which I thought was well told in the work. She does have needs as a Succubus, which cause problems for herself and the ends to many others, but this isn’t done haphazardly or at a whim. There is purpose, direction, and reason to a point in her actions which did hold the story at the fore of the work. There is some lovely heat in the erotica, a bit of Succubus mind control appears here and there which I thought was well done also.

The writing is solid, there are no moments of being taken out of the story, or a misstep in a word or phrase being out of place. Every action matters. Every event in important. Every character, no matter how small their role, drives the story onwards and that tells of someone that knows their craft, why they are writing the work and where they want to be when it is over.

There is an Incubus that appears in the work as well, and it is an interesting exercise to compare him and Elspeth’s natures. Both are complex, both are predators, but more importantly, it is the difference in their attitudes, what they desire most of all that separates them.

The work is told in three arcs, all interconnected and I found that in being written this way there were moments that connected back and forth which added to the overall understanding of Elspeth which I appreciated. To see how events swirled around her, what the consequences were at later points along the story was breathtaking at times.

The work ends on a twist that is quite unexpected, but in doing so leaves behind many questions and thoughts to wonder over. In doing so the work leaves a lingering impression that is wonderfully done. The strength of the work comes in the characters, their lives and the choices they make. Simply wonderfully told and more.

Highly recommended. While a bit less romantic than I normally prefer, that is well overshadowed by the strength of the characters, the power of the story, and more.

My thanks again to the author for sharing this work with me and satisfying my curiosity. Well worth the read by any measure and I wish the author all of the best in her future writings…

Postscript: Would you like to read this work for free?

In return for a review on Goodreads or Amazon, this work can be yours!

All you need to do is write the author of this work at Irene@MissIreneClearmont.Com and put “Tera sent me” in the subject line of your email.

All reviews are welcomed by the author!

This offer may be ended by the author at her discretion, so hurry!