A series of interesting Succubus stickers

A Review of Succubus by Miss Irene Clearmont

A Review of A Violent Seduction by Kiki Howell 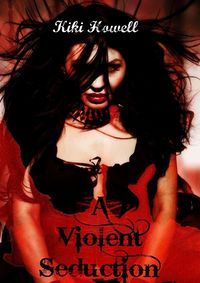 A Violent Seduction by Kiki Howell

When a story is written, there needs to be a sense of jeopardy. A threat appears, a problem, something that brings characters together and in doing so it drives the story forwards. Sometimes that point in the story, the description of it, is written to the point where the physical and mental pain suffered is so awfully cruel that the rest of the story is harmed by it.

Spite is a terrible thing and using it as a means for revenge is even more so… worse when all it does is bring suffering and pain.

When David stumbles into Myrissa’s Wiccan Supply Shoppe — the man bruised and bloody, complaining of strange occurrences and true night terrors — she agrees to help him. After studying his clouded aura and listening to his story, she believes he’s been cursed, bound to a succubus.

Agreeing to come home with him, cleanse his apartment and try to banish the sexual predator, she gathers her supplies. What she witnesses and battles though proves darker and more seductive, than she could’ve ever imagined. Will her magic be enough? Or will she also fall prey to the dark and violent seduction of a demon?

David is cursed by a witch and as such has a Succubus bound to him that cares only about doing harm. At the end of his sanity, and not understanding what is happening, he takes a chance to talk to Myrissa who agrees to help him, but that help will cost them both.

While this work has a succubus as one of the characters, she is never named and really only appears as more of a spirit than anything else. She is described by David as a very dominant, sexually powerful woman and she does appear in a smoke-like form to Myrissa as well. Beyond that there really isn’t much said about her save that all the succubus is interested in is very violent sexual encounters and quite literally taking a pound of flesh from David. The succubus seems to be a very stereotypical sprit of evil and really not a lot more than that. For how little is seen of her, that was not what I expected from the opening page of the story and I wish she had been more than she was.

David is abused, hurt, beaten and worse by the succubus and the descriptions of what happens to him are, for me, really awful things and I didn’t care for any of that at all. I don’t care for pain, I don’t care for abuse, and in the end the story was centred around all of which David had to live with and that was my single problem with this story. The abuse just was in every page, every moment and I do understand that it needed to be there for the story as a whole, but nonetheless at times it seemed too much so and it took away so much from what otherwise was an interesting story.

David, who he is, what he lives with, tells a lot about his character, the inner strength he has, and more, it speaks to the good that is in him. There’s hints about his past, what he was like before the succubus appeared and by the end of the work I really wanted to see more of that. Myrissa herself is really a fascinating character as well, I loved her personality, her intelligence, the power she had in her will and otherwise. Again, there is a lot of story in her character as well, and there are hints about that, but they, like the story of David, are smothered by the violence in the work and because of that, the character development suffers I think.

If I set aside all of the pain, the descriptions of the physical injuries that David has suffered, there is a story about compassion, strength, and will. That story I thought was well written with characters that I cared about very much. There’s a tiny bit of erotica in the story, which fit the rest of the work well. The work reads very much like a supernatural mystery adventure with a bit of heat in it and looking at the work in that vein I think it does exactly what it, and the title, clearly sets out to do.

But I really cannot completely take the violence out of the story and as such that takes away from my enjoyment of the story. There are pieces missing, ones that I think as a postscript to the story might have been interesting to see. For example, what if Myrissa confronted the woman that cursed David? What happens then? Beyond that, what happens after the last page of this story as the final lines really do point towards another story and I think I would like to see that. It would be , at least, not nearly as violent and perhaps in that, there could be more told about Myrissa and David too…

The violence in the work really took all of the heat out of it and I think that it didn’t need to. The abuse that David suffers is so overwhelming that it drowns out so much of what otherwise is a very good story in itself. The more the shame really in that and the more the disappointing that the Succubus was what she appeared to be, even if she wasn’t seen.