A series of interesting Succubus stickers

A Review of Fire and Earth by Alexia Foxx 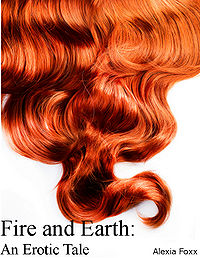 Fire and Earth by Alexia Foxx

Some stories expect Succubi to be… simple. They tell of beings who cannot be more than a moment’s pleasure before they take and disappear. As a whole I find those stories rather weak and uninteresting.

However, give that Succubus a sharp mind, the ability to learn, not just about others but about themselves, and give them the chance to have the other see in themselves that which is hidden away… That is a story I really do enjoy…

When Luke set off into the woods to catch a succubus he never imagined the hardest part of his journey would come after he had her in chains. She isn’t at all what he expected, and he isn’t the man he thought he was. Now they’re both tumbling out of control and Luke must find the strength to change. Or they’ll both stay trapped forever.

Luke captures a Succubus, whom he sees as a demon, not a person and in that choice makes some decisions that show the worst in him. She says nothing through all that she is put to until he finally goes too far, does one thing too far… are she speaks at last. And Sheal reveals that she isn’t what he expected her to be. But then, she also finds that she isn’t what she believed herself to be either.

Sheal, the Succubus of the story… Is and isn’t a Succubus. By that I mean there are aspects of her which are Succubus like, but then she has her own mythos, reality, and purpose that are meshed in that. She is every bit the vision of beauty and pleasure, but with that comes a pry mind, a strong personality and all of the questions that such a character brings with them. For the majority of the work her human form is seen, there is a glimpse of her true form as well, but it’s her explanation of living as many beings, of existing so long, that gave me pause. Her questions seem to be simple, almost childish and to the point, but within them comes something more.

In Luke, her questions bring at first anger, mistrust, and a touch of fear which he tries to break in the only ways he can. Over time, Sheal’s own reservations, mistrust and anger also are forced towards Luke in return. They come at each other in many ways, many confrontations, and as all of this unfolded… something wonderful happens. Understanding.

Past all of the strife comes that moment when Luke makes a choice about Sheal and in doing so forces Sheal to make a choice herself. It’s that choice, that moment when the story could have go very wrong… It turns a corner into a greater, more revealing and passionate story.

Beautifully written, the story makes one think about not what is happening, by the why of it. The clash of personalities, goals, and in the end what changes that relationship is written with soulful understanding that comes to mean very much.

Sadly, the work ends, not on a cliffhanger, but a promise. But that promise, the opening to the future left in the wake of all that happens… it has never been. In the time since this author published this work they have not continued, regrettably vanishing away into the ether. That’s the larger shame here because there is one promise made that is not delivered on. That I think, more than anything, would have every bit the story that this work was.

The tragic thing is that this author never published a following work to this story and in all honesty there are so many questions, within Sheal especially, that I would have loved to see the resolutions of. Her story, where she, and Luke go from here is something that I dearly would have liked to see. Sheal reminds me of… well… me.

Being more than she is and trying to help others to see as well.