A Review of L.A. Nocturne II by Katherine Tomlinson

Sassy does not a Succubus Costume make

A Review of Succumb by Sorcha Black 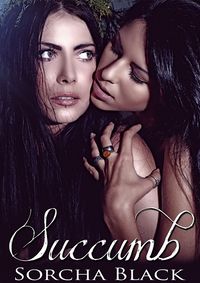 There are those authors that think they understand the concept of a relationship between a Domme and a submissive. They cannot seem to see the love, the need, the desire that travels in both directions. However, there are a very few authors who see the life that sparks when two souls connect, when needs are fulfilled and, sometimes, when you will do anything for the one that is yours… or you theirs.

Mix into that realization that Succubi are not evil, are in their own way doing good and create a world that focuses on that idea, brings it to life, and offers more…

That’s a story that holds me…

Lying tangled in her sheets each night, dreaming of sex, virginal Shiloh never means to tempt the spying succubus. Even so, the accident of their mutual infatuation won’t save Shiloh or Moth from the Council’s wrath.

As Shiloh sleeps, she draws the attention of Moth to her. Succubus by nature, she is confused by Shiloh, the attraction she feels and the same in return. A bold choice, a moment where the impossible happens, and then even the world of the Succubi and Incubi takes notice.

I loved this work dearly. Wonderful characters, a story that simply holds onto you from start to end. Love, not sex, and in this work that makes the difference. It isn’t a hot flash without meaning, it is a story that has a purpose, a need to fulfil and does that amazingly well.

Shiloh, the main character of the story, is both so very innocent and confused, but at the same time, as that gives way to the acceptance of her own sexuality, desires, and, most importantly of all, finding within herself that one single truth that sets her free is a stunning piece of writing. She isn’t without her own strengths, her own reasoning. There are fears to overcome, an understanding to come to and in all of that the driving force is Moth.

Moth, the Succubus of the work, is the only example of her kind that actually appears. There is mention made of other Succubi, but rather than seeing them, there’s a large focus on Incubi through which the contrast between Succubi and Incubi in their world comes out. Moth is never really described fully, but in the way she is that provides some lovely imagery to consider as the work unfolds. Following the events of the work through her eyes and then through Shiloh’s as well, makes for a very strong contrast between them both.

The most important thing about Moth is, for me, that she does not see herself as being evil, nor her kind as well. They are the bringers of pleasure and that spoke to me in a very close and personal manner. I loved her world, how it was not “hell” but a paradise and in that comes so much more interesting story to unravel along the way.

Moth does, in coming to love Shiloh, and in claiming her, break some rules in her world. I found it interesting how the views of the Council were so contrasted with those of our world today, how we look at sexuality and what that means. It is a rather Incubi centred world, which makes for some quite bothersome views by some of them.

However, amongst all of the set in their ways Incubi, there is one, Fox, who simply sees more, understands more, and cares more than all of the others. Every bit as important as Moth and Shiloh are, through him comes a change that makes the impossible real.

The work does not focus on the erotica to the exclusion of all else and in doing so the story makes the moments of passion that much stronger and memorable. The same is true of the D/s relationship that builds over time between Moth and Shiloh. Love matters in this work and that most of all makes this a story I admired and adored.

The only part of the work that troubled me, and this was only slightly, was that Moth was never called Mistress, only Master. I realize that is more of a societal thing in her world, but it sounded wrong to me. I think, to drive the change in her world a little more, having that happen, being called Mistress, would have been a clear point to the changes that Moth brought to her kind.

A passionate story, well written, characters that lived in the pages and beyond for me. Really nothing that took me out of the story and in doing so this work is one of my favourites of the year.

Everything I could have hoped for, a story that mixes so wonderfully with my expectations. Characters that you cannot help but care about and want to know what comes for them. If only Moth would have been called Mistress, that would have been the icing on the cake…

Perhaps, someday, this story will continue and Shiloh will speak the word.