The Choices You Make – Part I By TeraS

A Review of Succumb by Sorcha Black

A Review of L.A. Nocturne II by Katherine Tomlinson 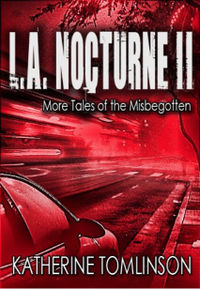 Anthologies are a difficult thing to work out well I think. Part of the problem is that stories that have to be short sometimes are too short. By that I mean the stories tell a tempting tale, you want to know more about the characters, the world and so on, but then the story comes to a close and you feel a bit lost by that when it happens.

This collection has that one single fault in it as a whole. The stories are really very good, but they are hot flashes which beg for more of the story to be told. I wish there would have been.

The collection tells stories of:

In this new collection of urban fantasy short stories set in a version of Los Angeles where the paranormal is the normal, a succubus prostitute discovers a murder, a dry cleaner catering to vampires has a crisis of conscience, a police psychiatrist enounters a thief with a very special delusion, and a couple of cops chase down a killer shape-shifter.

As with L.A. Nocturne, these stories are “tales of the Misbegotten,” noir-ish tales about the realities of “norms” and “paranorms” sharing a city.

There is only one story in this collection in which a Succubus appears called Sex Crime and it will be the focus of my review. i will add a short note about my feelings about the collection as a whole after that.

Desiree is a Succubus in the big city who works for Lady Lilith. She gets a call to meet a client and goes there, but finds that the client isn’t exactly all there anymore.

The amazing thing for me is that in a very short story there is character building, a world created, a crime committed and the aftermath seen and dealt with. With all of that the ending was, for me, a complete surprise and just worked so very well. The writing held me, the story was beautiful and I enjoyed it immensely.

Desiree I thought was one of the most interesting Succubi that I have seen in a short story this year and with that comes her personality, her drive, and her attitude. Desiree really made the story flow and become much more than I expected it to be.

Lady Lilith is the one that Desiree answers to, and one can assume she is a Succubus as well. But she’s just a voice on the phone, a fear in Desiree’s heart, and while that helped to set the tone of the story, and the ending, I wish there was more about her than there was. And that is really the problem.

The problem is that when the end of the story arrives, I was left wanting to know more. There’s a mystery that isn’t solved, questions left unanswered, and the work just felt like it was an open invitation to a longer novel. It’s something that I would love to see not just in this story, but really with all of them.

The stories in the anthology are well thought out, they have depth, power and with that comes a real need to see what happens next. But as a whole that doesn’t quite happen. The story is told, it comes to the end and there is a “and then…” moment but we never get to see the “and then” happen. If the author ever would think about writing a book, they really should take these short stories as a starting point and build on them. There’s lots more to tell… it really needs to be.

I’ll give Sex Crime four pitchforks out of five.

I’ll give this collection three pitchforks out of five.

The one flaw in this collection isn’t the stories or the characters. It’s the length of the stories, how much they felt like scenes or a single chapter in a larger tale and that is what I would like to see come next as those stories would be amazing to read.