A Review of Succubus by Anya Masters

The Choices You Make – Part I By TeraS

A Review of Troll Meat For The Sleeping Succubus by R. Woodrose 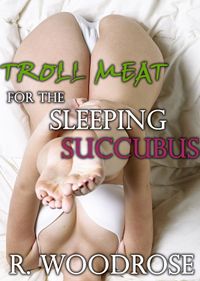 Troll Meat For The Sleeping Succubus by R. Woodrose

There are, as a whole, quite a number of very short pieces of erotica, some of which involve Succubi, that are popping up on Amazon. Many times there is little plot, little character development, and, as a whole, the entire focus of the work is the erotica.

Occasionally, there is the barest glimmer of an attempt at something better than that, which generally turns out to be a twist or two in the story. While that can, sometimes, make a difference, getting to the point where there is more to the story than a stereotypical story of someone having their way with a succubus can be a difficult thing to get through.

When a summoner attempts to conjure an otherworldly servant to help him prepare for a village festival, he is pleasantly surprised to find he made a serious mistake. Instead of summoning a helpful harvest spirit, he conjures an insatiable succubus named the Sleeping One, who can only be awoken by the pure sexual energy of the most masculine men.

The summoner one-ups that little requirement by transforming himself into a masculine troll.

Aurilorn goes about summoning a servant to make alcohol for a festival. A small error causes a succubus to appear instead and then things get a little out of hand in more ways that he expected.

As a whole the story is silly, has a very flimsy reason for the summoning, becomes sillier still when Aurilorn realizes he has a succubus with him. Beyond that, what he can get from the succubus in the way of mending his current problem was just… wrong.

The succubus, who’s name is never said, save for being “The Sleeping One” acts for the most part as a sex object and not much more than that. For much of the story, she is almost catatonic, reflecting her “name” and it takes quite a lot before she speaks, acts, or even really becomes engaged in the story. Really there’s no hint of her personality, what she is capable of, or anything else until the very last few pages of the work when there is a twist and her character is revealed. Sadly, it is rather stereotypical, and in that I was disappointed.

The characters are thin, the story is fleeting, and the twist in the end really isn’t unexpected as well. There could have been more to this, and really the ending points to that idea, but the work closes long before the story moves into something that could have been very interesting.