A Review of Troll Meat For The Sleeping Succubus by R. Woodrose

A Review of Succubus by Anya Masters 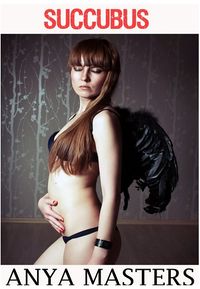 I think it’s interesting the summoning ideas that authors create in their works. Most of them are rather simple, quick, and as a whole leave a lot to be desired. It makes sense, at least to me, that a summoning should not be too simple, have a certain flair to it and, most of all, it should matter in what kind of Succubus someone summons to them.

Some Succubi like things a bit rough, and a bit more dominant than most. The question of that kind of character is how do you manage to write that and not make them stereotypically too much so? That is a bit of a challenge really…

“How can I ever thank you for summoning me, Gabriel?”

He summoned me, and now I’m going to take what I want from him and his body.

Except he doesn’t know what he’s gotten himself into. When I’m finished with him, he’ll be sore in places he didn’t know he had.

Gabe finds in the midst of translating an old book in the library that it contains a spell to summon a sex demon. Giving in, he gathers the needed items and casts the spell. To his surprise soon after he finds himself in the clutches of a Succubus that is everything that he wanted. And she wants everything from him.

As much as Gabe is the focus of the story, there really isn’t that much said about what he looks like and so much of that is left up to one’s own imagination. This works well as the actions of Gabe are more important than what he looks like. It’s also more important to know his thoughts as well, even as these thoughts turn to lusting after the Succubus that is calling to him.

We never learn the name of the Succubus, but she’s very dominant, takes control of Gabe and binds him to her will. As with Gabe there really isn’t much said about what she looks like other than her eyes: red, and that her teeth are sharp and pointed. Beyond that anything described of her is cloaked by what she is doing with her body to Gabe’s and how he reacts to that.

She is very dominant, and with that comes a bit of abuse, which I didn’t care for, but also a strength of will and control that I did like. She teases, punishes, and rewards Gabe as the story goes on and why that happens is made clear in the story before she appears and I liked that connection.

The means of the summoning, the things that Gabe had to do, what he did were more in-depth than many other stories about summoning a Succubus and that I did enjoy. I will make one note however in that there was a disconnect for me in how it was that Gabe would just happen to have all of the items he would need to perform a summoning. One might assume that none would have all of the items at their fingertips and Gabe just happening to have them felt very odd and that bothered me through that part of the story.

The work is a hot flash, lovely scenes that tell of how Gabe is used as a plaything for the Succubus, but also in how her words, her talents as a Succubus, give them both pleasure. Thankfully the ending of the work didn’t go into a stereotypically dark end and I liked where the story ended.

The problem is that the work is very short, and as such there isn’t a lot of character development. The name of the Succubus is missing and there’s just more that could have been done with the story I think. If not in telling more of the story of the Succubus, then of Gabe himself. If not the taking of Gabe by the Succubus as her pet for lack of a better description, then perhaps a bit more given about what the Succubus looks like. The work left me wanting more than it gave and perhaps another five or six pages of development would have taken this from a simple hot flash to a good opening chapter to a longer story.

I think this is something that the author needs to consider. What is the story of the Succubus? What, if anything, does she want with Gave? If Gabe happens to not use the “optional” item in the summoning, does the Succubus herself change? There are several other questions that give me pause to consider and to know the answers would take some time to tell.

Somewhat rougher than I personally like, though the Succubus herself is interesting and more importantly she isn’t quite stereotypical in her actions. That makes this work more than I expected. But it could have been a lot better if it had been a lot longer.