The Speech By TeraS

A Review of Del by John E Kelley Sr. 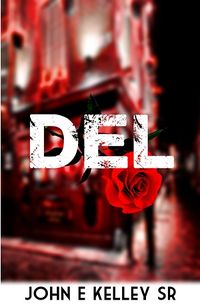 The mix of story and erotica is a delicate thing. Too much story and the heart is drowned out. Too much sex and the story becomes only that and nothing more. The kind of characters in the story make a real difference and it isn’t just the major ones that matter, the minor ones have their role to play as well.

Sometimes an author spends too much time on the beginning, setting up the situation and falls into the trap of talking about the minutia around the characters and not quite enough time allowing them to speak for themselves. It can be a hard thing to manage well at times.

David Pullman is an embalmer at a local funeral home and is very over worked. He decides to stop at a bar on whim. After a few drinks, a beautiful stranger enters his world. After talking for several hours, they seem to hit it off. What David doesn’t know, is his life is about to change.

David is ticked off with the universe and decides to stop at a bar for a drink. He meets a woman that enthrals him and soon discovers why that is exactly. When her truth is seen, what he thought he understood comes back to haunt him and he discovers that words do, in fact, have power.

At the beginning of the work, David is somewhat of an uninteresting person. Part of that is his attitude, which is fouled by his experiences, but also more so because of the focus by the author at the beginning of the story about what kind of car he drives, the sounds of it, what he sees around him and so on. There’s a bit too much concentration on detail and as such the story drags by very slowly for the most part until the other main character of the work appears.

Del, who’s name is the title of this work, is the Succubus of story and on the one hand she is a well told, strong, dominant personality who, at least for me, is obviously a Succubus from the moment she appears. The bar itself lends itself to that realization as everything around her and David practically screams that she is. She’s a mix of images, sort of what I would think of as slightly glam punk in look and poise. Overall this works well for her and with that comes a personality, questions, and thoughts that she poses to David that I thought were rather unique for a Succubus to have.

After a time, the pair leave and the erotica begins. There’s a good deal of dominance in these scenes which, knowing that Del is a Succubus, works well and reflects that she is a Succubus. There is a lovely passion mixed with some light bondage that I thought worked well. When the climax comes in the story and Del reveals herself to David, tells what she is going to do with him, and what transpires beyond that point, Del is very much the “evil” Succubus here. The ending is a bit of a letdown for me personally, there’s really nothing good in it and the final lines speak to Del being somewhat stereotypical in nature as a Succubus which for me reduced my enjoyment of the work.

Other than the beginning of the work, which was, as I noted, a bit hard to read being very dry, when David actually interacted with a minor character before Del appears, that was the point where the story came to life and it held my interest from that point forwards. Some editing at the beginning might be a good idea to remove that stumble, but otherwise it is a well written tale of Succubus control and dominance over an unwary man.

The work was a bit of a grind at the beginning but improved a great deal by the time the story’s reveal came to be. An interesting world with some facets I would like to see explored sometime.