Succubi Image of the Week 386

A Review of Succubus #2 by Rob Hicks 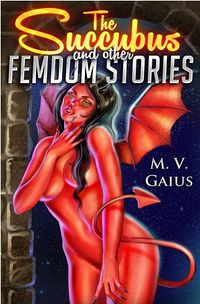 There are some stories which have a theme of female domination that I have problems with. That has a lot to do with my own view on the subject, what I believe a Domme should be, should act, and most of all, should regard those that give themselves to her.

I don’t care for abuse, pain, suffering, or anything that gives a Domme the appearance of being simply someone that wants to belittle, control, and, unfortunately, punish repeatedly those that submit to her. A true Domme is more than a whip or other means of punishment that she uses. Many that write about Dommes haven’t quite the right understanding of the relationship between a Domme and her sub.

The work is a collection of:

As this is an anthology of works, I will be reviewing the succubus story in this collection and then make some comments on the works as a whole.

Thomas Pincher is a of wealth, position, and a somewhat aloof and self-assured character. In a search for rare books he finds the rarest of all, a book which holds the spell to summon a succubus. Begin that he also is rather sexually focused as well, he goes about summoning a succubus for one night, but finds that being self-assured does not mean that one knows everything, or can assume anything.

As a whole, Thomas was the sort of character that from the moment he appears you expect something will befall him, something will go wrong, and the sooner it does the quicker the story can get into the real story that surrounds him. He tends to be the sort of person that looks down on others, gains what he wishes from others, and overall, just is what some might call a bit of a cad.

Most of the story circulates around the attitude that Thomas has, what his wants and needs are mainly focused on, and the seeming way that his entire life unfolded in such a way that he has every advantage and uses that over each and every person he encounters. But when he finds the book, reads that he can summon a succubus to him, of course he does so. But it is that arrogance, that assumption that everything will go his way that turns the tables on him in the most obvious way possible.

The succubus of the work is never named, nor does she appear as herself but as another characters in the work that Thomas’ attentions were drawn to before the summoning. She is seductive to a point, but then Thomas’ mistake changes her attitude, she becomes very dominant and then does things to Thomas from which there is no escape. There is some heat in that part of the work, which was written well, and the ending made sense considering what happened during the summoning and otherwise.

While not the strongest story in the collection, I did enjoy it for the seduction the succubus ensnares Thomas with and then the chains she uses to bind him. It is a complete story, the ending ties up the loose ends quite well, and the ending tells exactly what Thomas’ future will be, if not what the succubus herself might do in the future. That might be an interesting story to tell considering who and where Thomas is connected to and what might transpire from that.

The story does take some time to develop, to set up the situation, and once the succubus appears the climax of the work comes very quickly. I’m not sure that the balance of this work, the background verses the succubus works well as the beginning of the story did seem to go very slowly, but then it needed to in order to set up the latter part of the work.

The balance of the collection are a series of stories that for me run from hot to cold. The thing that makes the difference is the level of abuse that some of the male characters suffer through. In some cases the themes are cute, funny, and I couldn’t help but smile. In others I shook my head, sighed, and turned the page.

I am completely aware that some like harsher Dommes, but personally I never could understand why it was that they had to be abusive, cruel, and sometimes just a person that I just could not like at all. In those cases the heat that came in the story was severely muted for me and I just didn’t care for the story. Of the balance of the works in the collection, Snowed In was my favourite by far. The one I cared for the least was The Big Game and the difference was that the first was fun, cute and I could see love in the characters. In the second that just didn’t seem to be there and I couldn’t enjoy the story at all.

For the anthology as a whole, I’ll give it three out of five pitchforks.

A collection of stories with various themes, actions, and consequences for all those involved. There is really something for everyone overall in the collection, but for me the majority of the work didn’t have the heat I was looking for or the story about Dommes that I prefer.