A Review of Succubus Fyre: A Fey Fyre Tale by Vi Valentine

Some Angels could be Succubi with some better costumes

A review of two short works that, as a whole, were the beginning of what seemed to be something of an interesting succubus transformation story, one with some rather unique approaches. However, the series didn’t go past the first two stories, and that was a bit of a shame really.

World building is a difficult thing to do, it takes time, and if that world makes sense, then the story itself is so much better. Sadly, the author didn’t return to this series, moved onto other works and left things, quite literally, hanging in mid-air.

It’s the night before Halloween and self proclaimed ugly duckling Emma and her hot best friends Aiden and Taylor are looking for a thrill. The boys want to hit up a bar, but Emma deems the idea lame.

Then Taylor suggests they visit the local cemetery. There is a secret beyond the iron gates that he wants to share with his friends. He leads them through the dark woods and into a long forgotten graveyard for “undesirables” that includes the graves of some women who were hanged for witchcraft.

A statue of a woman wrapped in a snake stands in graveyard’s center and Emma finds herself drawn to it. She touches the snake, becomes possessed, and finds herself starving…for men.

It is Halloween night and Emma finds herself back with her long time friends. A visit to a long forgotten part of the local cemetery brings changes to them, Emma most of all.

The majority of the first work in the series is mainly focused on Emma, Aiden and Taylor, their long friendship, and their lives. It tells of what happened to Emma in the past, how it changed her outlook of herself, and the conflict that is within her.

All of this takes about three-quarters of the work before they all arrive in the cemetery, Emma comes into contact with a statue which has some very obvious imagery around it. Soon afterwards Emma is, for lack of a better explanation, possessed, in a way, and she changes both physically and mentally.

She becomes far more dominant, having control over her friends and, in the wake of this new found power, they fulfill all of the fantasies that Emma has held deep within herself. When this all comes to a close, Emma has two thralls, and she has a need within to seek out others to feed the darkness within her.

As a whole, the work does well in making the reader care about the characters, wanting to know what’s happening, and what the events all mean. There isn’t much in the way of any explanations however, the work moves away from story to erotica in the last part of the work. There are some hot flashes along the way, and there is a very strong hint of Emma becoming, at least in some way, succubus-like even if she doesn’t actually transform physically into a succubus.

I think as the start to the series, the work sets up things well, offers a mystery to unfold and a group of characters that have their own personalities, problems, and with that the work has a solid foundation to build on. But when the erotica comes into play the work turns a bit stereotypical in that it seemed like the characters were acting on rote. Perhaps that is part of the story, there is a good deal of mind control in this work. In the end, Emma’s power over her friends is quite interesting and leaves a lot of questions to be answered.

A good start, a bit lost when the introductions are done and the erotica begins, but there is promise, which is always good to see. 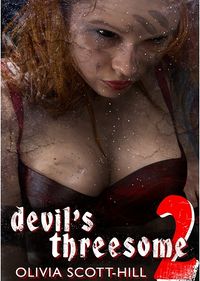 The second work in the series moves onwards from the first. I had hopes for something more than in the first in that I wanted story, not horror or erotica to take over. But the story faded out to be replaced by the horror for the most part and the the erotica did the same.

In doing so, in setting aside the mystery for the horror and erotica I found that this work wasn’t quite the same in holding my attention as the first was.

It’s the morning after and Emma is left alone to pick up the pieces. She can only remember flashes of the previous night – three bodies, naked flesh, filthy acts in the graveyard – but she’s lucky. Her best guy friends Taylor and Aiden don’t remember anything at all.

As she attempts to contact her buddies, Emma finds herself starving, but nothing in the fridge will satisfy her. Then the cute mailman comes knocking and she realizes that it’s not food she’s hungry for. At the same time, a coven of reanimated witches trolls the town looking for snacks to feed a similar hunger and Emma finds herself strangely connected to their evil souls.

In the end, with her zombified mailman lover in tow, Emma reconvenes with her friends to attempt to fill in the missing blanks from the night before. Fortunately for Emma and the guys, the blanks won’t be the only things getting filled!

Emma’s day after is not at all what she expected. Her hunger is worse, her powers grow, and she is starting to slip away. Horror appears among them all, and where that goes next is anyone’s guess.

The core of this work is, really, horror over everything else. In focusing on the horror aspect, which is quite violent at times, I found the story hard to read because the contrast between the horror and the erotica was so severe. In being so, the erotica was well out of place, didn’t read as well as in the first work and I didn’t find myself as interested in the work as I felt I should have been.

There are some revelations about what exactly is going on, to a point, and those are interesting, but this is fleeting and soon gives way to the horror. The blood flows, things become violent and this just didn’t do anything for me. Emma becomes less succubus-like and that’s a shame really. Her powers tend towards her being a succubus, but rather than holding her story in the realm of mind control and some kind of succubus transformation, it doesn’t go there. Emma becomes a monster, like the others that appear in the story and i just found that to be a shame.

While the work is written well, there just seemed to be a focus on shock and horror over the story, over the erotica, and, to a point, the reasons why all of this unfolds. The explanation takes up about two pages and it felt rushed. Perhaps more time should have been spent on the past, how this all connects to the present, and the why of it all.

This work, and the series, ends on a cliffhanger, which really isn’t much of one. It’s clear what Emma expects to happen, what she intends to do, and as such the next work in the series, if it ever appears, seems to be spoiled in the last page of this work. If that’s true, then it seems very stereotypical. That’s a shame because I don’t think it needs to be, there’s something more here and I hope the author intends to use that to their advantage.

These works were reissued on Amazon a short time ago, and as such the release dates on Amazon show them to be in 2015. I wonder if the author has decided to continue onwards here or not. I would like to think they might in if they do, I hope they turn back to telling the story more. There is a really interesting story here, that shouldn’t be lost in the erotica.