A Review of Succubus Fyre: A Fey Fyre Tale by Vi Valentine 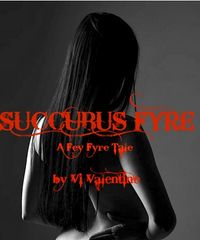 Sometimes the core of a story gets lost in the lead up to it. What I mean by that is there are side stories, little things that take the main character off in different directions. Sometimes that just doesn’t work at all. Sometimes it does.

A Succubus, no matter who she is, isn’t just the need for sex that seems to be the core of a lot of stories. It’s more interesting to tell a story about a Succubus thinking, considering, and sometimes. discovering something they never expected.

A indefinite hiatus from the opposite sex? On any normal day Wendy would cringe at the idea. Humans might be able to deal with the prospect of a sexless future, but for a succubus the very thought seems ludicrous at best and dangerous at worst. Sex was the only way a succubus had to release her Feyaire, the intense energy that all Fey Folk posses.

But things are hardly normal for Wendy these days. After a string of failed relationships with Fey men, Baron has stepped into her life. There’s something in his gaze — neither Fey nor human — that makes her Fyre flash hot with succubus cravings. Wendy is faced with a decision: give in to her Succubus Fyre, or stay away from him. Find out which way Wendy will go.

Wendy’s life is complicated, she doesn’t like the others of her kind, she can’t find what she needs from the humans around her. As a Succubus, being sexually frustrated is never a good thing. About to take herself off the table, in more ways than one, she becomes intwined with Baron and then the surprises really begin.

As a whole I rather enjoyed this work, though the beginning gave me pause. By that I mean the story seemed to be groping around, looking for the path it wanted to follow, but having to set out the situation for Wendy first. I’m not sure that worked for two reasons, One, I don’t think that dwelling on what is really a minor character for the longest time added to the story, and two, I can’t say that dealing with Wendy’s self examination over and over again made for a good story. At times it was a bit dry, dragging, and just didn’t hold my interest.

Once Wendy meets Baron, and the rest core plot of the story begins, then the work turns onto a completely different tone. There’s passion and seduction and when that comes to the fore the author’s writing passions are very clear. The heat in the erotica is delicious and brought this story from being average to something quite a lot better.

Wendy herself is a Succubus, a Fey. She has all of the beauty, sensuality and power of a Succubus. No horns or tail, if she does, they are never mentioned, but her skills are told with a lot of heat and that made the latter third of the work an almost perfect hot flash. Before the heat however, there is all of the self-doubt, concern, and confusing to get through. I’m not sure that reflected on Wendy well considering the moments after she meets Baron and I think it didn’t do her justice in many ways.

There is a minor character who is a Succubus as well, Lydia, but there isn’t a lot said about her. That’s a shame as from the little bit we see of her, I would have liked her to have a larger role. In fact, I could see this story playing out a lot better if the moments of Wendy’s poor relationship were removed and replace with Wendy and Lydia reminiscing about things before going to the party where Wendy meets Baron.

Baron is a mystery, one that isn’t explained by the end of the work. I liked him, I liked he and Wendy together, and I liked that there was a connection, more than a spark, between the two of them. From all of the characters in the work, I think Baron had the most personality and when that connected with Wendy, the sparks flew and the erotica was delicious.

I have to split this work into two parts, before meeting Baron and after. The before seems scattered and that hurt the story a lot. The after was focused, hot, and almost the perfect hot flash overall. There aren’t any problems with the author’s style in the heat of the moment… It’s getting to the heat that I think needs some work.

The work seemed a bit lost at the beginning, but managed to settle into the real story in a way that wasn’t silly, wasn’t a train wreck and more importantly, managed to tell a lot about Wendy in many ways. Hoping to see more about her, about Baron, and what it all means for them both sometime…