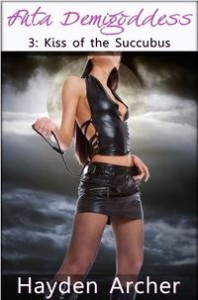 Futanari Demigoddess 3: Kiss of the Succubus by Hayden Archer

There are certain things that I look for in a work about Succubi. They don’t have to be the primary characters in the work, but they have to have some kind of presence. They should have the presence that Succubi have, regardless of their true form, and most of all, there has to be a personality, a meaning, a reason for them to appear in a story and not simply for the erotica.

Valerie just wanted to escape her dorm for a little while. She wasn’t interested in a beautiful redhead stalking her through campus. She didn’t ask to have monsters straight out of mythology chase her through a park. She didn’t need a mysterious raven haired woman in a dark dress to try and seduce her in that same park.

Okay, so maybe being seduced might be a good way to blow off a little steam after the night she was having.

Only Valerie is about to learn that there are very real dangers to being the daughter of a goddess. Ancient dangers that would love nothing more than to get their hands on, or get in bed with, the daughter of a love goddess who was silly enough put on a magical gender bending medallion.

And Valerie finds herself trapped between lust and danger as she meets a woman from antiquity who is perhaps the most dangerous of all for a demigoddess with her particular gifts. As she feels the kiss of the succubus.

Valerie has a problem, rather a large one, and she’s trying to figure out what has been happening to her. In her attempt to avoid a woman that seems to be following her, Valerie comes face to face with another being who calls out to her new found needs and desires. But what is she, what does she want, and what does that all mean?

There is a lot of world building in this work, but it adds a lot to Valerie’s character and makes it quite a lot easier to enter into this series without reading the first two works. There is a bit of an information dump about her, but it isn’t overwhelming and it’s enough to bring a new reader to the series up to speed and have a rough idea what’s going on.

Valerie herself is a unique personality and the internal monologue as the story unfolds is at times hilarious and worrisome, but then the situation she finds herself in can’t really be taken any other way. The mixing of her normal self and that of having male thoughts and needs within her does provide some amusing moments as well.

Eventually Valerie comes face to face with a woman who is, from the first moment, very much acting like a Succubus. She’s sexual, she’s seductive, and the effects on Valerie are really quite telling and seem right for a Succubus as well. Things do get a little out of hand, the question of who is actually in control shifts several times until, finally, there is an abrupt climax and the Succubus vanishes from the work.

The Succubus herself, in her human form, is really deliciously described in action, pose, form and voice. She is really sex unbound and uses all of her abilities to obtain what she wants. The reveal about what she actually looks like I thought was well done in that it isn’t a matter of “telling” but “showing” bits and pieces of what she really looks like. It isn’t a complete picture, but it does allow for a lot of imagination about what she really does look like. Much like her human form, she seems to have a sexuality and beauty in that form as well, even if she isn’t all that she seems to be on the outside.

The one issue I had with the Succubus as a whole was that she kept referring to Valerie as “Daughter of Venus”… over and over again. That took me out of the story many times as it sounded stilted and awkward. Just imagine saying that phrase out loud while having sex and you can see what I mean. It doesn’t work well. As well, the Succubus herself is never named, and while that really wasn’t needed in the work to any real extent, it might have made for something to latch onto later on… Perhaps Valerie calling for her to return to get some answers? Perhaps having some power over her knowing her name? There is a hint about that in the story, but that doesn’t go anywhere either.

As a whole, the story had a good opening, the characters were interesting and the story had a purpose. The erotica was hot, a nice mix of raw sexuality, mind control and dominance that worked well overall. The dialog needs some work however, again, it seems stilted and odd at points and I think speaking the dialog out loud might have helped with smoothing that out through the story.

As a whole the work told an interesting story and as it was part of a series there was a lot of background that was glossed over a bit in order to get to the point of the story. Still, the Succubus was interesting, though unnamed, and it would have been more of a story I think if there was more exposition and a bit less over the top raw erotica.