Rain and Sun By TeraS

A Review of Pray For Release by Liman Thursday

A Review of The Succubus Journals by Monique Reyer 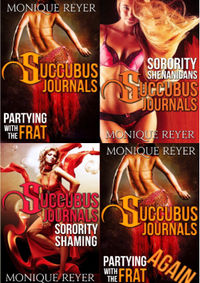 The Succubus Journals by Monique Reyer

Recently a short series called The Succubus Journals was completed and as such I am going to review that series today on the Tale. The thing about this series is that there is a story, it is actually an interesting one, but the problem comes in that the story isn’t told for the sake of one hot flash after the next, after the next and so on.

If a series has an underlying story, one that explains why a succubus is where she is, or how her powers work, that’s interesting to me. Things are less so when that story is glossed over for the sake of rushing onwards to the next sex scene and little else.

Hey there. I’m Leisha, your friendly neighborhood succubus (aka “shapeshifting sex demon from the pits of Hell”). My boss is the most powerful warlock on the planet, and he likes to send me off on missions. Tonight I’m supposed to… Hang on, this can’t be right. He wants me to get someone into a fraternity?! And then go off and play with all the members of a sorority?! Hey boss, isn’t this kinda beneath me? I mean, you know, primordial spirit of lust and sex and all that? What? Shut up and do it? Okay, okay, fine!

Le sigh. I guess I’ll just have to put up with being taken by all those strong, virile, gorgeous college guys…and then gettin’ it on with all the hotties from the sorority down the street. Oh yeah, this is gonna be one awesome night!

The summaries are told in the voice of the main character of the series, a succubus named Leisha who has one of the most odd personalities for a succubus that I have read in some time. Beyond that, some of her powers aren’t what are usually seen in succubi, and that makes her a unique character.

I liked her more when she was telling her story, pieces of her past, who summoned her and so on, more than when she was having her way with various students at a college campus. Some of the flashes are, to be honest, rather repetitive, rushed, and sometimes there isn’t much in the way of story to hold those parts of the series together.

Leisha isn’t stereotypically evil, not by any means, and there are several points in the series where she cares about others, what happens to them. She teaches lessons to some, gives others some needed boosts in their self-image and, most interesting of all, she doesn’t want to do others harm. She’d rather have fun, be fun, and enjoy sex for the sake of it than in doing something evil through sex.

There is a lot of internal monologue as Leisha learns about those she is sent to teach lessons to, how she relates to the one that summoned her, and, as well, one specific mortal that she has a particular like for. It makes her a much more interesting and better character and in being so makes the series that much better.

The problem comes through the dialog, which reads a bit odd, some of the actions taken by others in the work, which just makes them look foolish, stupid and most of all, stereotypes the male characters into thinking about sex for the most part and then takes the female characters and twists them in different ways before the series is done.

By the end of the series, there really isn’t anything in the way of a conclusion to speak of, there’s quite a few plots left unfinished, actions left to play out, and in some cases, the results of what Leisha did could lead to more problems. Still, none of this really is played out to the end.

The focus of the series is all of the erotica that revolves around Leisha of all kinds. Just about anything goes with her, and usually does. But having most of the series being focused on that, the short moments when some character development begins, some questions are answered, isn’t told as well as if could be in the rush to get to the next piece of erotica.

The series could do with some editing, there are a number of word errors and some dialog just sounds wrong. A bit more focus on Leisha herself, to tell more of her story, where she came from, why she is there, and so on would have made this a lot more enjoyable for me.

I’ll give the series as a whole three out of five pitchforks.

There’s promise in Leisha to be sure. The problem is that being drowned by the erotica. A better balance, a little more care and some focus would have made this series more than it came to be.