A Review of By The Horns by Alys Lovell

A Review of the Evil Sorceress In Training series by C.V. Walter 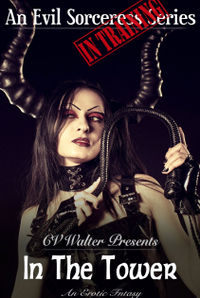 Evil Sorceress In Training: In The Tower by C.V. Walter

Amazon’s keyword search has a lot of problems really. It’s not hard to ‘game’ the system, to make a book appear in a keyword search for the most vague reasons possible. In the case of this series, a succubus appears in one book, for one short scene and then never appears again, nor is mentioned, or for that matter has any bearing on the story save for a means to transition in and out of a sex scene,

Now this happens in the second work of a five part series and, having some hope that the succubus might appear again, I read through the entire series. As such, this review will be talking about the series as a whole, the appearance of the succubus in particular, and the thoughts I had about the collection overall.

Ari can feel the magic gathering for a ritual in the tower and it’s turning her on. When she gets there, she finds Dylan, Issy’s companion and some time lover.

Eager to help, Ari enters the circle that’s being prepared and creates her own deal with the creature being summoned.

When the sorcerer discovers her interference, she’s forced to join Dylan in the circle. Will she keep what innocence she has left? Will she still be a perfect sacrifice?

The series follows what happens to Ari as she comes to realize that she has the powers of a sorceress, learns about them, and the makes plans of her own. Along with those plans, Ari gets herself into a variety of situations, problems, and, in every case, as the events unfold, Ari has as much fun as she can with as many beings as possible.

As the series unfolds, Ari turns out to be quite a schemer, making all kinds of deals and working towards her ultimate plan, as she sees it. The thing is, the plot of the series gets a bit overrun by the number of sexual encounters and it takes away much of the interest I had in it.

I’ll note that there is but one appearance of a succubus in the series, that particular work is noted at the beginning of this review. The succubus is never named, only appears for the sake of having sex with another of the main characters, and then, after Ari is involved in things, has some fun with her as well. Once that encounter is over, the succubus vanishes in a puff of smoke, never to return, to be spoken of, or thought of again.

The way the succubus appears feels a bit like a backhanded compliment in way, she being described as looking like any other beautiful woman save for her horns and hooves. The succubus also really doesn’t have much of a personality, really caring only to have her way with the morsel she is offered to seal a deal. Which brings up the other problem here. The sorcerer summons the succubus to complete a deal and that’s confusing as the sorcerer made a deal with another being before. So is this summoning about that or something else? Even after the succubus gets what she wants, the deal made is never explained, referenced, or explained. it quite literally disappears into a puff of smoke.

The individual stories didn’t connect together well for me, there were gaps that never were explained, plots left dangling, and in the end, when it arrives, the ending is far too quick and unsatisfying for how much was put into the series. To take five books to tell a story, even short ones, and then end things on a whim just didn’t work for me.

There is some story and plot to be found, but it’s fleeting. The focus is mostly on the sexual encounters over the story, to write a series of hot flashes and connect them together as best as possible. I think the series would have worked better with some more time spent on the story to balance things out against the erotica. In doing so I think I would have cared more about Ari and the other characters, been concerned when their lives were at risk. But that didn’t happen here.

The idea of a series following the adventures of a “evil sorceress” is interesting and given more time to write a stronger series I think that would work well. But better plot, connecting events together and having a overall plot are needed here.

I’ll give the series as a whole two and a half out of five pitchforks.

A bit thin on story, some lack of heat in the hot flashes, and characters that just didn’t connect. Some editing might help, but more focus would by far.