A Review of Her Incubus by Elizabeth Zanders

A Review of Succubus Rising by Camdra Abott 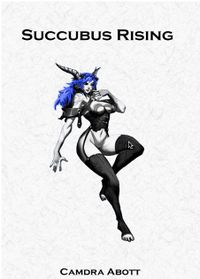 The start of another series for review today on the Tale. I find it difficult to read something where the story is written such that the reader is placed in the role of the main character. The problem I have is accepting what that characters does and being made to accept that it was reasonable for them to do so.

If there is reason, explanation, consideration, then it is possible to accept them doing some very questionable things. When there isn’t, and the story doesn’t seem to flow well, or make sense at times, then there is a problem that needs to be addressed.

A young mage becomes embroiled in a fight for survival in a world turned hostile. Making a pact with a succubus and gathering a small group of survivors he fights and fucks his way through the remains of his world.

As a whole, the summary of this work that the main character ‘fucks their way’ through the story is completely accurate. There is the barest wisp of a plot and characters in the work which are completely overwhelmed by the rather poorly written sexual moments that appear.

Really, the hottest parts of the work, erotica-wise, are when the main Succubus of the work, Agrat Bat Mahlat, appears, has her way with the main character and then… sort of vanishes into the background for the rest of the story. There are other Succubi that appear, who are not named, but those appearances are rather flat and rote in how they are told. The coming into this world I like, description-wise, but beyond that there isn’t much heat or interest for me. As well, to a point, they appear to be somewhat stereotypical in appearance, though there is a hint of something more that should have been explored more in the story, but wasn’t.

The work does not read well, mainly because, over and over again ‘You’ are described as doing something then ‘You’ are described doing something else before ‘You’ go off and have ‘Your’ way with every woman ‘You’ encounter. The entire work continues in this vein and after a while that just becomes very painful to read. I don’t feel like the author did themselves any good in writing in this way. It would have been much more effective to give the main character a name, write from their perspective and in doing so, make a connection with the reader.

As well, there isn’t a real plot through the work so much as there are a series of sex scenes linked together with the main character moving from place to place. Past that, the attitude of the main character, for me, makes them dis-likeable from almost the first thing they do. That shouldn’t happen because what is the point to reading a story when you have to struggle with the events, don’t care about the characters, well, save for Agrat, but that’s another point altogether, and by the end one is left wondering what was the point of the story in the first place?

The work needs a lot of editing, better focus, more story, and even that isn’t quite enough for the focus on the erotica which needs it’s own improvements. It doesn’t have to be romance or anything like that, but it does have to, at some point, have some value to it.

The work ends with nothing really being resolved, many open doors to continue through, and a lot of questionable actions that lead to the ending which does really nothing. I have said many times in my reviews that story is important, characters matter, and if those two things connect, then the erotica is something special. I can’t say that here.

An interesting concept, but beyond that the work needs editing, focus, a reason for what happens most of all. ‘Just because’ isn’t a good enough reason to have something happen. The story comes in the details and this work doesn’t have them.

I will look for the following work in the series when it appears to see if the author improves on this work. I hope so.