A Review of Nice Guy by Mike Leon

A Review of Succubus Duel by Amanda Knight 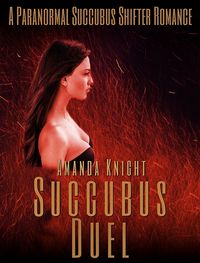 I understand why, sometimes, authors like to put a twist in a story. If that twist explains why things happened in the story, then that’s perfectly reasonable. Where I have a problem is when the twist is told in less than a paragraph, comes out of left field, and is not explained at all.

In doing so what was a story about the triumph of the heart, what seemed to end on a good and valid ending, gets wrecked and, at least for me, I feel cheated. A good story doesn’t need a single sentence to make it valid. It never really should.

Paige is fighting for her husband’s soul as a Demonic Sex Demon appears before them and claims Conner’s life.

Can Paige submit herself to a mind game and win a duel between her and the powerful demon in a all-in sex contest.

But Paige has yet to realize who is the real monster…

Paige finds herself facing the succubus Evestriel who is bent on taking her husband Conner’s life. Learning all she can, she comes to conclusion there is one way to save him and she makes a deal with Evestriel. The battle begins, but the outcome is the question unanswered.

The work is, as a whole, very well written, the characters are strong, have their own stories and there’s some wonderful heat when the erotica appears. Billed as romance, there is a good deal of that appearing in the story as well. There’s so much to like about this work in so many ways, but then, the last two pages just take away all of the story and left me wondering.

Evestriel is the image of a succubus through the story. Sexually powerful, controlling, very strong willed, She has a purpose, intends to have what she wants and drives towards that. There is a hint of her true form from time to time, slightly stereotypical, but that’s not done in a way that takes away from her character.

Both Paige and Conner are fully fleshed out characters as well, there are quite a lot of foibles in each, they are in love, and it’s that love which Evestriel pushes against using lust and passion to try to overcome them. That battle, how it unfolds is an amazingly good story and I loved each and every moment because there was purpose to both sides of the battle, Conner being held between the two.

However, as I have said, it is the last two pages of the work that, for me, feel completely unnecessary. The reason as to why Evestriel was after Conner makes sense from her perspective and I can accept that reason as it stands in the work. The problem is that the reason is suddenly dropped into the midst of the work, is not shown more than in passing, and leaves a really bad taste for me in the story. It feels, in many ways, as if the author decided to throw the twist into the story for the sake of doing so. For me, it doesn’t work.

If it had been explained more, if the reason would have been told more than a split second of realization by Paige and then the story closes, I would have accepted that more. As it stands here, I just felt the journey was not worth the ending. Something better needs to be here to make this work what it should be.

If the ending would have been explained, drawn out, something more than the single page that it comes to, then I would have liked this a lot more. But I can’t really because the ending just felt like an afterthought once all of the good in the story was done.