A Review of Night Waitress by Morgan Hawke

A Review of The Devil in Me by Carl East 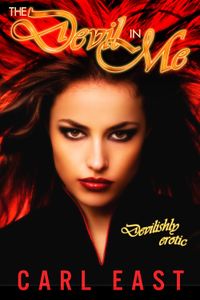 The Devil in Me by Carl East

The author Carl East has written quite a number of works in which succubi appear or are main characters in the story. Some of these have been really wonderful stories that I did enjoy and recommend always. The stories tend to go in some unexpected directions which adds quite a lot to this author’s stories.

The question that this works brings is: What happens when you have been possessed and then freed? Is there a cost or a gift in the aftermath? The meaning is, always in the eye of the beholder of course.

The exorcism that saved her life has Samantha coming to terms with what happened. Unable to remember the demonic possession, she’s told that there are others like her, and each has received a special gift or power as a result. When her power begins to manifest, she’s shocked to discover that it’s not what she expected. How she decides to use it, may be a gift or a curse, but there is no denying the pleasure it gives.

Samantha was possessed once, but is freed. Told there are others like her, and that they all have a power as a result, she wonders what that might be. It doesn’t take long for the power to reveal itself. Samantha has some of the powers of a succubus… and something more.

Overall Samantha isn’t a succubus, or at least physically one. She does however through her possession gain the power of controlling the lust, needs and wants of others. At first this is focused on one particular type of individual, but over time it’s clear that she can do more than that. She does not have horns or a tail or wings, but there is something about her that has changed and that makes the erotica go forwards from there.

Samantha becomes, when aroused, a futa, and with that change comes a change in her personality, becoming far more dominant for one, but also she seems to turn also a bit masculine in her mannerism, voice and inflection. The erotica that follows is a bit harsh, slightly over the top, and in the end didn’t quite live up to what I had hoped the story might offer. That’s not in that Samantha became a futa, it is that she’s a kind of succubus and that part of her isn’t explored as much as I would have liked to have seen.

The story moves very quickly from the first encounter through a short explanation of what happened and then the erotica takes over from the story as much as it can. Interspersed are bits of story, of discovery, but they aren’t enough to carry things between the erotica. There’s more than enough erotica, there isn’t enough good story to tie it all together and that’s the real shame here.

The beginning offers quite a lot to tell, but the rest of the story doesn’t quite deliver on that promise. There is heat, some futa erotica mixed with some mind control which works as a whole, but the story behind all of that is a bit thin and I wanted to see more.