Succubi Image of the Week 383

A Review of Dentata by Layla Hart

A Review of Opus Covetas: Succubus Summons by Branford Hubbard 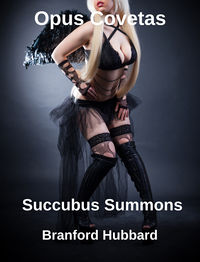 Dialog is one of the most difficult things to be able to write. If it is managed well, it ads a lot to a story and its characters. But a lot of the time there is something off, odd, or just wrong and it’s a jarring thing.

It’s more confusing when a character appears with one voice, a modern one, and then suddenly loses that voice to one of the distant past. That’s a bit of a hard thing to ignore when it happens. But it does.

Still, technology can fix almost anything…

Virgil is an average college kid looking to shed his innocent demeanor – he’s tried everything humanly possible, his loneliness drives him to click on what he’s sure is a scam of a dating site, but can he be sure of that? Virgil soon learns that his idle investments in this site, and its mysterious ebook, the ‘Opus Covetas’ may not even be of this world!

Virgil finds himself checking out a website about devil women and through this comes into contact with a particular book. And through that book he finds that some legends are, in fact, very real indeed.

As a whole I thought the overall story concept was interesting. Man finds website, is given an eBook that opens the door to a Succubus. She is drawn to him, of course, and then… the most obvious ending possible happens. There is a twist, but nonetheless, the ending was obvious so far in advance honestly.

Ishesistrinaw is the Succubus of this work, Virgil calling her Isis as he cannot manage to pronounce her name. She’s very much a Succubus with a single purpose in her thoughts and, of course, Virgil and his friends find themselves “doing” things with her. She has a heart-tipped tail, which I liked, and there is a hint of Morrigan Aensland in her appearance otherwise. But what’s most confusing about her is the language she uses.

Before Virgil actually comes to see her, she has a very modern style of speech. By that I mean the two of them text and chat several times and there’s all of the appearance of a person with a good grasp of modern language there. When she actually appears she doesn’t speak in that way. It’s very odd and stilted,  sounding very medieval in tone and character. And that’s a real problem. It’s hard to accept her real voice and that other voice as being the same being.

She is, as a whole, rather stereotypical in nature and the usual things happen to Virgil and the others she comes into contact with. I had problems with that mental image of her because her closing words in the story just didn’t seem to ring true. There was something missing… in the translation I think is the only way I can put this.

The work itself needs an editor to fix the oddness of the dialog, the halting interactions, and most of all, the single-minded turn the work takes for really no good reason that I could figure out. It began with a premise that I thought could turn into something really interesting and instead it just devolved into a sex scene which really didn’t do much for me.

Where the work ends leaves some thoughts behind to ponder. There’s a lot of problems left in the wake of Isis for one, and for the other, the questions about the site Virgil found and what exactly all of this means, including the book he downloaded, are just left as afterthoughts.

I just don’t think it needed to end on this point, nor do I think that the heat was as good as it should, or could, have been considering a Succubus was involved… But that’s me.

Needs some editing, some focus, better dialog (read it out loud and you’ll see why it’s so weird) and a lot more heat than what is there. The promise is there, it just needs to find the way onto the page.