A Review of the Lilith the Demon series by Charlotte Chase

A long name for a Costume, but I sort of like it

A Review of Nailed By A Nightmare by Chelsea Chaynes 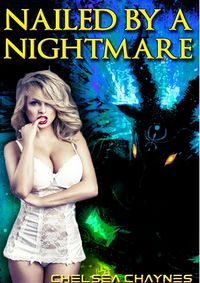 Nailed By A Nightmare by Chelsea Chaynes

Dreams and nightmares are the things that each of us holds within our own hopes, fears, lusts and wants. They can be the things of wonder, or the ashes of despair. They are also, sometimes, the stuff of legends.

Telling a story of confronting those nightmares, the legend within them, and what it can do to one’s mind, body and soul is an interesting concept. The only thing is when the nightmares turn really dark does that help the story or harm it?

It had been six months since Nancy last slept through the night. She feared her bed, she feared the night, and she feared the monster that did whatever it wanted with her helpless body. In order to stop the monster she must venture into the deepest recesses of her mind and battle him for control, but fears like hers aren’t easily conquered. They put up a fight.

Nancy’s nights are filled with nightmares of a being that attacks her over and over again. A visit to the doctor, a bit of information, and a change taken result in the worst battle she has ever faced. One that she cannot avoid for her own mind takes her there.

The work focuses on Nancy, her stresses, her moments of trial and conflict that she deals with every moment of her life. Coupled with that comes the experience of sleep paralysis, if it is that, for her dreams and reality become very bundled together as the story progresses. Her dreams are very violent and are described in a way that makes it clear she is being attacked and put through experiences that are terrifying.

The glimpses of the creature in her dreams do make it clear that it could be called an incubus as physically and the way the creature uses Nancy and what it wants from her seem to be very incubus-like. There is a beast-like aspect to the creature and it does, for all intents and purposes, act like a stereotypical incubus in many ways.

Once Nancy comes into the climax of the work, when she finds a means to confront the creature of her dreams, the true character of Nancy comes out and for a few pages I had to wonder if she was in fact a succubus in some way considering her actions, words, and desires in that part of the story. She turns as violent and animalistic as the creature that is tormenting her is. That particular passage of the work I found difficult to read as the violence I did not care for very much.

While I understand that in the framework of this story, the violence needed to be there, that didn’t mean that I had to like it and I have to admit that at points I skimmed the pages to get back to the story itself. When the story was there, when the reasons for what happens to Nancy are clear, the story is very well written. But the harsh, almost foul encounter and its contrast with Nancy’s dreams was a bit of a problem to get past.

The work ties up the plot well at the end, though it is slightly abrupt in the way that unfolds. I can’t say that I wanted more story as there really isn’t anywhere for the story to do, or for Nancy to move forwards with her own desires and thoughts.

There is some erotica in this work, but it isn’t much in the way of romance. It is a darker, more horror focused erotica which isn’t something that I liked. The physical pain and suffering that Nancy must deal with didn’t sit well and as such there wasn’t a lot of heat in the story for me. Some mint like the brutality of the creatures actions, or the confrontation that Nancy pushes through towards the end of the work. I did not as a whole.

The violence in the story makes sense in its context, but I didn’t really care for it very much overall. The story itself was well written and overall the concept works in this case. But it is the violence that just made is hard for me to enjoy the story and that’s a shame.