A Review of Accidental Succubus: Love At First Bite by Vivian Fraser

Snoops – Part One By TeraS

A Review of Purely Sinful by Rozalin Rose 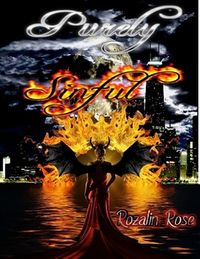 Many times when a story has a Succubus as a main character, there is a problem. It’s very common for the Succubus to never change, to remain stereotypically evil. To not learn, to become more than she is and, usually, by the end of the work she’s likely to be a footnote in the conclusion, or worse still, just be removed when she’s no longer needed in the story.

It’s when the story forces the Succubus to look upon herself, to find that there is something more than being what she is. To have a focus on who she is, what she desires and, if she’s fortunate and the story allows, even find love.

Detective Cole Harvey was hot on the trail of a sex trade organization based in Chicago when he encountered something no one could have expected. A succubus; a demon who takes the form of a stunningly beautiful woman and preys on the souls of weak willed men. As intimidating as she is sexy, the demon offers Cole a deal: bring her corrupt individuals to feed upon and she will help him find the person responsible for his wife’s brutal murder. Catching this killer is a case that has eluded him for a haunting two years. Could Cole trust the sexy succubus? Or would he end up becoming another lost soul for the centuries old demon to consume?

Cole is a detective on a mission who finds himself in the presence of a succubus who offers him something he cannot refuse. A change to find out who, exactly, killed his wife. The problem is that the succubus, Zafira, knows his thoughts and plays a game with his desires. But some games become more than they seem. They become, eventually, the truth, and sometimes the truth can set you free or bind you forever. The question for Cole and Zafira is which shall it be?

As a whole this is a complex story wrapped around two characters who play off each other really quite well. The world has many aspects to it, there are layers of plans, schemes, wants and needs that revolve around and between the pair. In doing so the plot evolves from what appears to be a simple question which Cole needs answers to into something more complex. The question of what would you do for someone you love and what risks would you take. That’s not a simple question in this work because it wraps tightly around both Cole and Zafira, making them question themselves and, more importantly, the reality that they both live in.

At the beginning, Zafira seems to be, but not quite, a stereotypical succubus. There is a certain attitude she gives that just makes it easy to, if not dislike her, then tolerate her. But what’s more interesting in her case is that as the story continues, there’s a subtle shift in her attitude, personality, and more importantly, she comes to a new understanding about herself. Within that context, by the end of the story, she’s a wonderful character in that while she has her moments, the real person beneath the horns comes out at least. That is well worth the story by far.

Cole’s character undergoes a similar transformation in that he is, very much, a lost soul at the beginning of the work, but over time he finds purpose again, holds onto that spark, and makes choices that lead towards an ending which while slightly telegraphed, makes sense and fits into how this universe works.

There are a vast number of supporting characters, some of which take on central roles to the main plot, others pass through as fodder for some displays of Zafira’s powers. With them comes a puzzle to sort out and figure out who is responsible for the events that unfold and what Zafira and Cole might do about that.

There is a light touch of succubus erotica in the work, which has a lot of heat to it, but, sadly, always ends in a stereotypical way for Zafira. It isn’t dwelled on for the most part, but it tends to become a bit repetitive through the course of the story. There are hints of mind control, a bit of dominance as well which add flavour to Zafira which work well overall.

Well written, I liked the plot, the puzzle, but most of all I loved reading how Zafira coming into contact with Cole changes them both and what happens to the both by the end of the work. However, the ending leaves a bit to be desired. With all of the building up of the mystery, the events of the story and all that both Cole and Zafira go through, the ending is a bit unsatisfying.

The ending felt too rushed, too much in a hurry to get to the last page and draw the story to its conclusion. It was a bit too pat, a little too rote an ending and after all of the turns and twists in the story to those final ten pages, I was slightly disappointed in that.

The ending leaves open the possibility of a following work, to see what happens to Cole and Zafira in the aftermath of their actions. But it does end in a way that brings closure to most of the story. But again that ending goes by in a rush, and I just found that odd. I felt like there was a missing chapter at the end, or perhaps more accurately, the final chapter was taking two longer chapters, cutting them into one and leaving a lot of needed pose out of the final work.

An amazingly good read which holds you throughout. There’s purpose in the story and the characters that are within the pages. Most of all, there’s growth and a transformation not just in Zafira, but in Cole as well which just works in the best way.

It’s a shame that the work isn’t well distributed, it really should be, as it’s well worth one’s time to read an become immersed in a well told story about Succubi and finding their truth and that of others.