A Review of Purely Sinful by Rozalin Rose

A Review of Accidental Succubus: Love At First Bite by Vivian Fraser 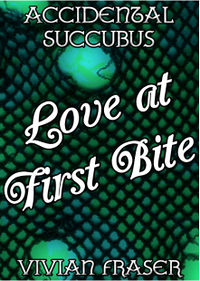 Origin stories need to have two things. One, there needs to be a past for the character in question, a reason for them to be where they are and why it matters to them. The second thing is that when the transformation happens, for example someone becomes a succubus, it shouldn’t be done in a single line of text.

It does not make for good story telling when questions are left behind in the aftermath and, more importantly, no one is really sure if the transformation happened in the first place. Assuming things isn’t a good idea you know.

Melody didn’t think she’d be doing much more than flirting when she went out to the club to dance and have a good time. Going to vampire bars made her feel so alive, so sexy, so passionate.

This time is different, though. When she meets sexy vampire Julius all of Melody’s ideas about a little bit of innocent fun go out the window and she finds herself in his apartment, in his arms and under his fangs.

Every action has consequences, though. Is the price Melody will pay for her night of passion too high?

Melody goes out on the town and finds herself in the arms of a Julius, a vampire. After a bit, or bite of passion, Lissandre, a jealous succubus appears and things take a turn for the worst for Melody.

The work really isn’t about succubi save for the appearance of Lissandre for a few short lines in the work to transform Melody into a succubus and that’s the real problem. Melody simply becomes a succubus in the blink of an eye and there really isn’t any storytelling to be seen in that.

The core of this work is a vampire romance and that on its own is written well and has some lovely heat as well. But when Lissandre appears, she is simply a jealous woman who uses her powers to curse Melody and then… she walks away. There really isn’t anything told of who Lissandre is, what she wants. or for that matter, how exactly she transformed Melody into a succubus, assuming she did so.

I can’t say that really worked as it just went by so quickly that I felt a bit let down by that. Add to that the oblique appearance of a succubus and the work just didn’t… work for me.

It really isn’t a story about succubi, the appearance of Lissandre is fleeting and momentary and in that comes questions not touched on because the ending is too soon. The next work in the series I hope delves into that part of the story. However, for those that enjoy vampire romance there is quite a lot in this work for you. Sadly, not enough of what I was looking for however.