Succubi Image of the Week 382

A Review of Contractual Obligations – Book 1 by Zoe Miller

A Review of I, Succubus Incubus by Cain Berlinger 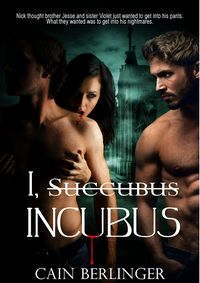 I, Succubus Incubus by Cain Berlinger

Mysteries are always interesting things to read. Sometimes the biggest mystery to solve is the one that resides within one’s self. It’s the question of who you are, what you desire, and what your dreams are made of. And both Succubi and Incubi love dreams don’t they?

Reality is what you make of it they say, but sometimes reality becomes something that you didn’t expect. When it does the questions left behind can be both troubling and arousing… If one cares to look into them deeply.

When Nick moves back to New Orleans he meets and lusts after lounge singer, Violet, but she has other things on her mind. Sometime later Nick meets Jesse, who turns out to be Violets twin brother. Nick and Jesse have a brief affair but Nick still hankers after Violet. The final confrontation proves you cannot trust anybody.

Nick is trying to be an actor, but like all up and comers he needs to survive. He encounters Violet, a woman that made an impression on him and discovers that she still does. When her brother Jesse appears from nowhere, things become… interesting.

It’s quite obvious from the title of this work that Violet has the role of a Succubus and that Jesse has the role of an Incubus in this work. While they do, there are only hints about what they are truly like as a Succubus and Incubus. There aren’t the normal aspects seen nor are there really anything that points clearly at them being so save for a short passage in the work.

But the hints are quite clear and their actions do, in many ways, say that they are. They are both very sexual beings, they both play against Nick’s desire and they are both constantly in his thoughts. So as a whole, yes, they are what they seem to be.

Over the course of the story it’s interesting to watch as Nick grips with his own desires, thoughts and needs in the face of who he is and what his needs are. Violet opens a door to some of that but Jesse takes as much if not more. It’s an interesting situation to watch unfold and as it does it becomes clear that Jesse is lost to those around him to an extent.

While there are some hot flashes in the work between Nick and Violet and then more so between Nick and Jesse, they really aren’t the focus of this work so much as the mystery that surrounds all of them and what it all means.

When the conclusion comes, it is a bit confusing, though it is seen from Nick’s perspective and as such one would expect it to be considering what happens at the climax of the work. It ends on a question, an important one, and an opening towards another story about these characters. That question is one that I would like to see the answer to, if for no other reason than to tie up some loose ends and settle the final lines of the work which offer an opening towards something I found rare when it comes to stories about Succubi and Incubi.

The characters are very strongly written,with clear voices and actions that do not falter through the work. The settings are richly told and paint a vivid picture as well. There are a few minor word errors in the work, for example using “to” instead of “too” in one case. As well there are a few moments where the story became slightly confused, but I think that was intended to show Nick’s confusion more than any fault of the author’s writing. But it took me out of the work for a time as I mulled over the events told and tried to set them clearly in my own thoughts before continuing onwards.

The work needs at least one more editing pass to collect the small scattered word errors in it. There are things not explained that would be the start of another work easily and I would like to see that sometime from this author. The world they have created leaves one wanting and that is a good thing to have. A bit more clarity in two passages would have been nice as well, but as a whole a wonderful mystery that I did enjoy.