A Review of I, Succubus Incubus by Cain Berlinger

A Review of Contractual Obligations – Book 1 by Zoe Miller 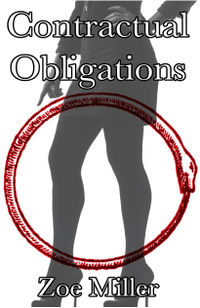 A short time ago on the Tale, I reviewed a wonderful world by an author that I really enjoyed and have been looking forward to seeing more Succubus-themed stories to appear from them. Their first work, Antiquity’s Scion, was I felt a wonderfully different story and I reviewed that work here on the Tale. They have started a series recently and today I will be reviewing the first work in that series.

The series isn’t set in the same world as the first work I read from this author, and this story has quite a different tone to it as well. It’s different, in both a good and perhaps not quite so much so way, but nonetheless, it tells it’s own story in its own way and that’s what is important.

The letter of the word can cut two ways. There is meaning in the words to each involved in them. One to answer, and one to speak them. Sometimes the order can be the most important thing to keep in mind for both sides, for it really does matter…

Arsa is a Skint, a sensuality demon who preys on human essence. Inexperienced, but primed and ready for her first foray to steal the souls of the unwilling, Arsa is surprised when her summoner turns out not to be some drunk college kid with a Ouija board but Grace Gallant, Esquire of the occult law firm Harris, Harris, and Clay. The tables turned, Arsa quickly discovers that Grace intends to leverage her preternatural powers towards career enhancement… after a little fun, of course.

Arsa finds herself summoned to the mortal world and things take an unexpected turn when the summoner turns out to be more than Arsa expected. A battle of wills, a turning of fortunes and Arsa learns that some deals are more than one sided, they are completely overwhelming.

Arsa isn’t quite a succubus, though she has the aspects of being one in her physical form, actions and needs. She is, for lack of a better explanation, rather new to the world and there’s a bit of innocence in her character that I thought was a unique touch. Being so, she’s kept off balance through most of the story and as a result things happen which twist Arsa in a lot of directions.

Grace, the other character in the story, is dominant, there’s no question of that. She’s obviously intelligent, has summoned Arsa for a reason, and has a slightly cold aspect to whom she is that makes her really quite dislikable. It’s in her tone, her actions, and as a result, there’s a blasé feel to her, as if she’s been down this road before and doesn’t really care much other than to get things over with.

While the work is written well, there is a problem. The story rushes through events very quickly and there isn’t really much time spent in telling more about where Arsa is, why she’s there, and what Grace has in mind. While the book blurb explains who Grace is, within the context of the story itself that isn’t explained. There’s a few leaps of logic that the reader needs to make to draw the threads together, but it isn’t explicitly explained as it is in the book blurb.

There is a bit of erotica in the work, but as the story moves so fast there isn’t a lot of time for heat to build up which hurts that. Also, as a result of Grace’s tone and her attitude, the dominance she holds over Arsa seems a bit stereotypical and becomes almost a caricature. The two characters at times don’t actually talk to each other but rather talk over or perhaps more accurately, each talks to a wall, getting no real response in return.

It’s not easy to like either character here, mainly because they rub each other in the wrong way from the beginning. There’s conflict from the first moment and the story focuses on how that conflict develops and what the resolution turns out to be. It does set up a lot of questions about both Arsa and Grace, but there’s really no delving into what’s going on under the surface and that’s a shame. The why of the summoning, the how, the explanation of why Grace does certain things to Arsa isn’t explained and as such, at points, there is some confusion in the story.

I think the author would have been better served to draw out the interaction between the characters more, possibly in making Grace less of a… I think bully is the best way to describe her at the moment, though I hope that isn’t true. There is a point to how they interact, why things turn out as they do and I understand that. But for me it was hard to get into the core of the story, to connect with either character. I wanted to understand Arsa better than what was revealed about her and to learn more about Grace, but that didn’t happen and needed to.

Being that this is the opening work in a new series, there needs to be questions and plots left over to be explored as the series goes on. In this case the background is very thinly told and I hope that more of the “why” comes in the next work. The author’s strength, at least to me, is in how they construct a universe and how that universe relates to the characters within it. Forcing the issue, as happens in this work, doesn’t allow for that to unfold.

I feel like this work could have been split into two separate parts and in doing so there would be more time to set things up. Perhaps in letting the characters tell their own stories before drawing them together might have worked better than just putting them into conflict at the drop of a hat. The author has a talent for telling involved, passionate stories. In this work I just didn’t feel that came out and that’s a shame.

The characters are interesting and the work sets up what seems to be a unique universe to play in. The problem is that the story moves far too quickly, leaving little time to enjoy the story. I hope in the next work in the series the author delves into the who, how and why because that needs to be explored. There’s promise here, but it isn’t bought to the fore.