If all else fails… Find horns and a tail

A Review of Vampire: Taken by the Succubus by Sinn Lee 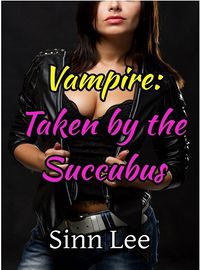 Vampire: Taken by the Succubus by Sinn Lee

Story and character can be interchangeable at times. By that I mean the story holds things together, but if the characters are not able to do the same, then the work can fall apart. It isn’t always necessary to know everything about a character, nor is does it have to have everything explained either.

A good storyteller can show instead of tell. The work shows what is happening and doesn’t exactly tell you. After all, imagination can fill in the blanks at times and that makes things more interesting.

Sandra is a centuries old vampire, on the hunt for a delicious meal. But when she finds the person she’s after, she’s not prepared for what she encounters. A steamy situation ensues when Sandra finds herself on the Succubus’ menu after interrupting her latest meal.

Sandra, as a vampire, has seen it all. Or at least until she senses something different and comes face to face with a Succubus. Tables are turned, surprises appear, and Sandra learns that there are some creatures that actually do “bump” in the night.

The work is told from the perspective of Sandra as she chases a scent that captivates her and urges her onwards. Sandra isn’t the stereotypical vampire, thankfully, in that she is mature, intelligent, and is aware of what goes on around her. But in spite of all of that, she is drawn by the call of something she has never experienced before and when she finds out what, or rather, who that is, the story takes an interesting turn.

Sandra is dominant, is in control, but that fades away quite quickly after she tastes her first succubus. The succubus herself is never named, but it is clear she has been in existence for far longer than Sandra and as such the succubus takes control of Sandra, after she takes care of someone else.

What follows is a seductive dance between the two, their worlds brushing against each other with danger close by. The succubus is not at all stereotypical, which I found deliciously seductive as well. She is sexually not quite the normal succubus as well, but that doesn’t take anything away from the heat the two build towards the climax of the work.

There’s a cute little pause in the action just before the closing of the work that I thought spoke to the mischievousness and power that the succubus had as well. The moment really plays off well considering what the succubus was like in the heat of the moment, and what her attitude and power is.

The work ends on an open note, a path that might be explored sometime in the future. I would like it to be, if for no other reason than to learn the name of the succubus and about her past. A tightly written story, the characters were very unique and captivating. There is still a little quibble with the author needing to edit their writing, there were a few mistakes in grammar and words being split up at the wrong points. The heat is wonderful most of all and the world created really appealed to me. I just would like to have had more story than there was.

Two interesting characters. one still a mystery at the end, and an open door to something more perhaps? It would be a good thing to see as there is more to tell here by far. And I’d like to see that.