A Review of Vampire: Taken by the Succubus by Sinn Lee 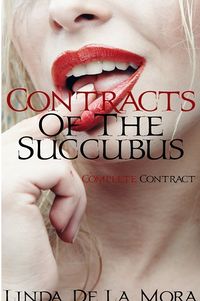 Contracts of the Succubus: The Complete Series by Linda De La Mora

A review of a complete, at least, to a point, Succubus series today on the Tale. Normally I would review each of the works in the series individually, but as they are found in a collected work, I’ll combine all of my thoughts about the series into this single commentary instead.

It is not the easiest thing to create a series, to hold the parts together and make them into a larger whole that makes sense, reads well, and in the end, comes to a conclusion that makes the tale worth the time. Perhaps that is an art that needs to be the focus of writers more than it is sometimes.

It is said that contracts are the be all and end all. They hold one’s word, one’s being, and, sometimes, one’s soul. The thing is, however, sometimes that contract has a loophole… assuming you can find it of course.

For a price, Trish will be any man’s dream, their imagination the limit. But when she’s the object of every wild fantasy, there leaves no time for her own. Her daily (and nightly) outings have her losing steam until an old flame returns to drag her into exactly what she needs to spice up her life.

Trish is sucked into the inner workings of Hell and questions its darker deals, but she soon learns her place in the underworld and is taught exactly how much her love means to those that thrive on domination and obedience.

Hell has never been hotter, and you’ll be chained to the bed right with her!

Trish is a succubus who knows that contracts means everything. She’s been a succubus for so long that all that really matters are her contracts and nothing more. Her past returns to remind of things that are more important and then Trish needs to make a choice which can cost her more than she could have expected.

Rather than reviewing the series individually, this review is of the series as a whole because, in truth, the individual stories do not stand on their own, but I’ll get back to that point.

Trish acts, at least in the beginning, as a rather disinterested succubus. There is a moment where she appears as what the stereotypical succubus looks like, but that passes quickly and the real Trish appears. It’s extremely difficult to like her in the beginning, mainly because there’s so very little about her to connect to. Her life is complicated of course, and she talks a lot about that with her few not-quite friends as well. Once past that, Marcus, an incubus, appears and then the story turns from being uninteresting into something a bit more than that.

Marcus is a mystery in many ways and the thing about this work is that mystery between Trish and Marcus never really gets explored or explained. It’s a rather large plot hole in the series and the ending, when it comes, doesn’t answer the most important questions about them both.

There is one other succubus, named Grace, who is, for the most part, just unlikable from her first appearance. She is a foil to Trish for the most part, which does work, but her tone, attitude and overall character just rubbed the wrong way, which, at least in the tone of the series, made sense even if I didn’t care about her when she appeared.

Over the course of the series, Trish puts herself on a mission to find out what happened to Marcus, where he is, and then to try and free him. That in itself works as a story, with some sidetracking that didn’t do a lot for me, but it does work overall.

There is some erotica, really a series of short hot flash scenes which come and go rather quickly before the story moves onto Trish’s next stop along her planning and actions. I didn’t feel a lot of heat in the erotica as most of the moments were not the sort of thing that I enjoy. There is a final scene at the end of the series that I did love, but there’s a problem with it as well.

The series has some editing problems, there are many points where there is a wrong word used, something said that makes no sense. There’s also quite a number of disconnects in the series between chapters, but also there’s a huge disconnect at the climax of the work in the last four pages. The chapters, or parts of the series, exist in their own way and the connections between them are rather fleeting. I think there needed to be more time spent in getting from point A to point B at times. By that I mean it’s hard to follow when the characters go from being in danger at one moment to be entwined in bed together in the next. It’s frustrating as there’s something missing that needs to be there and it isn’t.

The same can be said about the supporting characters. They pop in and out of the story at times with no rhyme or reason to that happening. While who they are is explained, to a point, there’s really not much seen from their point of view to understand why they do things as they do.

I felt lost at times in the series, because there were so many moments in which a character could have directed the story, explained things better, drove Trish towards the actions she takes. That’s not to say that the events don’t make sense as a whole, as a series however, it’s just that disconnect between parts that bothered me.

The work needs another editing pass to clean uo the word errors and to try to make the scenes connect together better. Most of all, I really feel that the ending didn’t give the series a good place to end in a lot of ways. The ending is what it is of course, but the moments to that ending need to be better than they are.

One last point is that the work is described as being bondage/submission themed and I just didn’t really see that here. There is a bit of that in the erotica, and it’s very light in tone. But that isn’t the core plot of the series. I see this as more of a mystery/adventure sort of work as a whole with a bit of erotica added to spice things uo.

I’ll give the series as a whole three out of five pitchforks.

There was a lot of promise, a story that was interesting. But there needed to be more to the story, more to hold things together and more told of the characters themselves.