A Review of Dream Seductions: All The Queen’s Men by Celeste Hall

A Review of Mildred and the Succubus by Christopher Bates 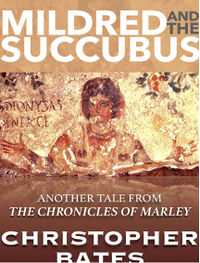 Mildred and the Succubus by Christopher Bates

There are some stories where I cannot manage to put what happens, or more accurately, why things happen clearly into my thoughts. In some cases it is a question of how the characters speak, or not. Coming into a work where it seems like there is something you should know and understand before reading it makes some stories very confusing at times.

That confusion can become a means for the story to drift and lose its focus. When a Succubus is involved and the main character is a rather unique personality, that can make the story turn into something unexpected.

Mildred Bonnie Fox, known to everyone who matters as “Mills,” is having a bad day.

She’s at odds with her fellow survivors, the group of men and women who, like her, are hiding from the bizarre zombie infestation sweeping through Marley, Wyoming. To get away from their nit-picky criticisms, Mills has retreated to the basement, descending the long stairs, entering the enormous cavern below the safehouse on Main street.

She’s not looking for much, really.

All she wants is a place to cool off and maybe watch some television, preferably a cooking show by Rachel Ray. What actually happens is the sixty-something woman finds herself launched on a reluctant quest, an unenthusiastic effort to save the world. In this she is aided by the Goblin Ralph and a strange woman met along the way: Kiara, a cryptic figure whose odd ideas and interests are much too uncomfortable for Mills to think about, let alone consider.

Mills only went looking for a quiet spot to watch TV. Instead, she finds purpose, friendship, romance.

And maybe even love.

I have to admit that this work is, as a whole, very confusing. Part of that is the reasons for why the characters are where they are, what their situation is and what develops through the story isn’t exactly clearly said.

Part of this comes from looking at the story through the eyes of Mills who doesn’t quite seem to be “all there” in the story. The way things are described in her thoughts, the situations she finds herself in are at times a bit difficult to follow. It wouldn’t be necessary to really explain all of the obliquely mentioned characters nor would it be really needed to lay out in detail exactly what is going on either.

The work has an odd accent to it, or flow, that I just found difficult to find a connection with. There are so many questions that come up over the story, many of them just focusing on what Mills is doing and as well the question of who Kiara is, what she wants, and what is happening.

Kiara is the succubus of this work, but it isn’t exactly clear that she is a succubus as she never admits to it. It is entirely possible that she is a succubus, her actions, personality and appearance all seem to say that she is. She’s also a bit circumspect in nature, which I liked and how she and Mills play off each other I thought was well done.

The situation that Mills and Kiara find themselves in gets them both into a situation that isn’t good for them, or anyone else for that matter. That situation really isn’t resolved for various reasons as the work goes on, but there is a grudging connection that builds between the two of them.

The work reads, in a way, like sort of a Dungeons and Dragons adventure in which confusion seems to be the main thread of the adventure up until the point where a decision has to be made by Mills. The problem is that the decision is made, Mills offers something to Kiara and… the story ends.

There is no resolution to the story, there is no explanation about what the threat was really or what Kiara wanted or for that matter what Mills really wanted. It simply ends and there isn’t anything more. That’s a shame as there are some interesting hints about Kiara and Mills that I would have liked to see, but never do.

The work feels like it is the opening chapter of an adventure story from which the real story comes from. That’s part of the problem, the other is that the inherent confusion within the work gets in the way of the story itself and that’s a problem.

The characters, and there are a lot of them, are interesting, but there is only a taste of them. There isn’t much heat in the story, but really the work isn’t meant to have that I think. I believe that what happens is supposed to lead into a larger story and perhaps it will.

Confusing at times, but the characters still do shine through that fault. An interesting universe with its own rules and stories to tell. It just needs to get to the story through the confusion.