Lilith Aensland does have Tribute YouTubes as well

A Review of Mildred and the Succubus by Christopher Bates

A Review of Dream Seductions: All The Queen’s Men by Celeste Hall 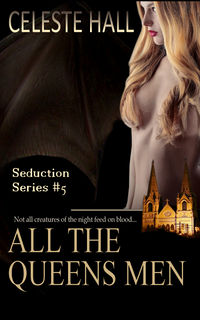 Dream Seductions: All The Queen’s Men by Celeste Hall

It has been several years since I last reviewed a work in Celeste Hall’s Dream Seductions series. I reviewed the first book called Dream Seductions: Ethan, and then the second and third works here on the Tale as well.

I have to admit that I lost track of the series and was quite surprised when the last work in the series appeared last year. I found that I needed to read the previous works in the series again before starting on this work because, in this series, history matters.

And in this universe where incubi outnumber succubi nine to one, that’s rather an important thing to keep in mind when you are a Succubus and your needs start to overwhelm you and those around you…

Be careful what you dream…

Syrena was raised by a police man and his wife after she was found wandering the Nevada desert alone as a very young child. That unique bond to the human species nearly destroys her after she reaches maturity and instinctively begins to seek out a mate.

Syrena is a succubus lost in a world she doesn’t understand. Trapped, held, and alone, she finds comfort in the heart of one human who proves that there is more to give when there is love held. The battle to survive is not only a physical one, but one of the heart as well.

There is a real shift in the way this work tells the story of Syrena, compared to the earlier works in the series. While Syrena is the main character personality-wise, really the story revolves around Max, the human that Syrena first mated with, calling him her First. There’s a bit more of a action-adventure plot here rather than the more mystery and detective themed works in the first four parts of the series.

That focus comes out of necessity as the need for Syrena and Max to escape and take the incubi that are around her as well, from captivity to freedom pushes events onwards. It is a slow buildup towards a climax which reveals some things about Syrena and her kind that were a bit shrouded in mystery, but it also puts into clarity how Max’s connection, not just with Syrena, but the incubi as well, works.

There is some lovely heat in the work, especially with Syrena and Max and in that love and affection, there comes a change in the incubi that pledge themselves to her. The moments between Syrena and her incubi are at times violent in nature, but that is tempered quite a lot by the need from Max for there to be some humanity in themselves. For some that’s a hard lesson to take and watching that come out in the characters is a treat.

The work ends in a pause, a moment before the next part of the story will begin in the next book in the series, whenever, hopefully, that may be. The ride to that point is a fast rollercoaster which tests the characters to their limits and more.

Wonderful characters, the plot moves at a brisk pace and it is a wonderful page turner. A few, very minor mistakes missed in editing, but they are easily overlooked for how well the story is told.

I had hoped that this work would have brought closure to the series, but it doesn’t. There’s more to be told, more for the characters to confront, learn from, and overcome. I hope, soon, the author will return to the series and show where the story is meant to be taken to.

It is a shame that the author was prevented from sharing this work by the mazes of publishing rights for as long as she has been. While this is the fifth work, it doesn’t read as the last, and, perhaps, someday the climax of this series and all of the mysteries abounding within can be brought to light…