Lilith Aensland does have Tribute YouTubes as well 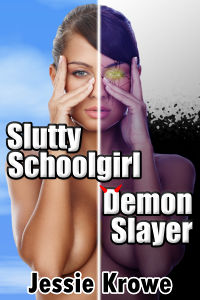 Some ideas that I read in some stories really aren’t that bad. They have possibilities and in the end, it is that which interests me, or not, in them. What I hope for is that the idea leads into something more than a hot flash, or flashes, and there is some story as well.

Sometimes both things are there, and there is hope for something more than I expected, but then the end of the work comes with a screeching halt and… it is more than a little bit disappointing really…

Lilith started out as a simple college girl only concentrated on her studies. One late night in the library, she falls asleep and awakens in a world full of sex-crazed demons. She learns she is the only one that can prevent them from taking over the human world. Using her martial arts skills and voluptuous body, she must learn to both fight them and fuck them to save the human race. Will she learn to vanquish the demons, or will the demon inside of her force her to do unspeakable things with her body?

Lilith isn’t aware she’s anything unique until she runs into otherworldly beings who see her as a sex toy and have their way with her. In doing so she finds herself being slowly transformed into something, and someone, different than she was. That would be an interesting story on its own and there are hints of that story within this work. The problem is that they are only hints. Characters are present who are supposed to mean something and then they aren’t used save for in the most tangental of ways.

There is a lot of erotica in this work, one hot flash after the next. All of which are different kinds of creatures either trying to possess Lilith or others around her and have their way with them. Anyone that has seen any manga would be able to pick out many of the creatures or at least have a good idea in their mind of what they might look like. For me at least it was less erotic than repetitive. I found that I didn’t care very much about what happened to Lilith or anyone else in the story because there really wasn’t a story to keep me involved with the work.

As the story continues on, Lilith herself is transformed physically into something of a creature of lust which drives her forward in her transformation towards the climax of the work in more than one way. But after that happens… the story ends on a cliff-hanger. I just thought that the situation was a good one, there was a story to be told from that point forwards but it wasn’t. There could have been a lot more story, a lot more to be told not just in the work as it appears, but where it ends.

The concept is intriguing, but the concept doesn’t really go anywhere save to some sex scenes interspersed with the occasional tidbit of story. Breaking up the erotica would have made this work better overall and there was a lot of opportunities to do so but weren’t. Really I wish they had been.

This author also needs to find an editor. There are quite a number of tense errors and incoherent passages in the work that make it difficult to understand at times just what exactly is going on. As well, the story is drowned in the sex that happens and whatever there might have been is not taken to a further point to make it more than simply a series of anime erotica hot flashes.

There was something in the beginning of this work that looked like it was going to be really something interesting, but then the story gave in to the sex and for me at least there needs to be a lot more story here. The ending was disappointing and felt like there was supposed to be a follow on story to this one… which never happened. It would have been nice to see and I think more so if this story had been expanded into something longer than it is… Because it could have been.