Succubi Image of the Week 381 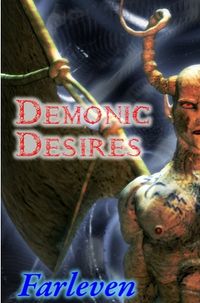 Some of the most interesting stories about Succubi are the ones that tell of someone being transformed into one. It can be a lovely hot mix of seduction, mind control, transformation, dominance and submission. The transformation alone however cannot be enough to keep the story interesting. There needs to be a character with purpose, to tempt and change for one.

For the other, the story shouldn’t rush. It need not be a race to the end by any means. In other words, a hot flash is good, but a story with heat is so much better…

Choose your words carefully when dealing with demons…

Sylvia wanted power, and unlike most college students, she’d stumbled her way into getting some. In the back of the university library she’d managed to find a collection of ancient texts that could grant her the power to bring forth creatures from the demonic realm into our world. It was almost too easy, and she couldn’t resist the allure of having a demon serve her.

She never expected the ravishing masculinity of what she summoned, or the way he could unleash her desires. Her quest for power and revenge soon gave way to the needs of the flesh, and her very innocence that she’d used to draw the demon from his realm was now a prize she wanted him to claim.

Sylvia comes into possession of a means to summon a sex demon whom she intends to use for her own revenge. Planning to make those around her submit to their fate in her name, the demon finds that Sylvia’s own desires shape her as well. Mind, body and soul.

The work focuses on, for the most part, the mind control aspects of Sylvia falling to the whiles of her summoned sex demon. There’s some very hot subtle shifting in her thoughts, wishes, desires and emotions as the story progresses and that’s all done with this author’s usual flare which their other works show.

The demon, Sorkrelk, is as a whole physically a stereotypical incubus-like being, horns, tail, red skin and all. He’s not quite stereotypically “evil” as a whole however. He has certain desires, he sees Sylvia as a means to an end and over time he corrupts her, changes her, mind, body and soul. There’s a neatly told shift in his attitude towards Sylvia, how he nudges her thinking and, over time, shifts her from being dominate in her thinking towards submissive which then starts her fall.

Sylvia, from the first moment, is clearly out of her depth in a lot of ways, being blinded by her own need for revenge and thinking that using a sex demon against those who have caused her so much strife is the way to do so. She’s a bit more “innocent” than what Sorkrelk expected and in that comes the means to her becoming a Succubus over time.

Sylvia’s transformation is quite good for the most part, her final change into a succubus making her be, physically, somewhat stereotypical, horns, tail, red skin and so on. She’s a bit of a whirlwind of sexuality at that point, which she should be, and in the moments beyond her transformation that offers some delightfully seductive possibilities. But as much as I loved this work, there is a rather overriding issue.

It’s much too quickly told and that’s the shame.

The thing that I didn’t like about this work was how fast the story went after Sylvia was introduced and she did the summoning. It felt at times like a mad dash towards the ending and that bothered me. There’s some really hot subtle mind control, Sylvia’s transformation is hot as well. But there’s not a lot of detail as a whole about that.

The story mainly turned on Sylvia’s changing thoughts and desires as she succumbs to the demon and then, finally, she shapes herself into being a Succubus. At this point, considering the beginning of the work, what Sylvia’s plans were, I had hoped that Sylvia’s new self would have her way with those she wanted revenge on.

But that didn’t happen, The work comes to an abrupt end right at the point where it could have become very interesting. I don’t think it had to. There’s too much promise in Sylvia’s new self, what her desires are, and what she can do. I felt like there was at least another twenty pages of story to tell which the author didn’t. I would like to see what happens next rather than things just being left where they are.

Setting that aside, the erotica is hot, the mind control themes are well told and the succubus aspects, when they come to the fore, are well done. Written well, there’s a lot of good universe building and as a whole the work stands up. I just would have liked to have had more rather than the ending there is here.

Slow down a bit, draw out the story, and bring it fully to where things lead to. There really needs to be a Part Two here if for no other reason than making this hot flash into the story that it wants to be.