Not that bad a looking wig really…

A Review of Futanari Demon by Taylor Jax 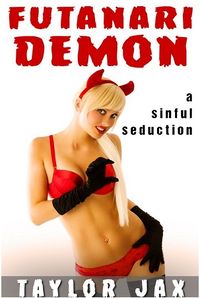 Something I’ve noticed of late is that there is actually quite a lot of myths and legends getting mixed up in stories. Ghosts get mixed in with Incubi for example. While that sounds like a good idea for a story the problem becomes when the ghost/incubus doesn’t actually appear in the story. Rather one specific part of them does and otherwise they are a mystery.

The larger mystery becomes when at the end of the story you aren’t exactly sure what happened, why it happened or for that matter, if the entire thing was a really weird dream.

It’s a slumber party from Hell!

When Kate and Jane mess with a Ouija board, they get more than they bargained for. A creature from the spirit world wants to share something long and hard with them.

Kate and Jane get high, have some donuts, play with a Ouija board and things do a little crazy when the spirit that answers wants something more out of the two of them. A strip tease, some kissing and then things get really weird in a psychedelic way.

The work is really just a hot flash between the two main characters with Damien, the possible incubus of the story, watching for most of the work. It’s not even clear if he is an incubus because he is never seen… well save for one particular body part. He seems more like a sprit, a creature that possesses others and has his fun with them. Whether that makes him an incubus is another matter.

The summary of the work is a bit misleading considering where the story ends and how it does. I felt it was quite the let down with respect to the rest of the work, what happens between Kate and Jane especially. The sexual innuendo is quite right with regards to the story, which really is the core of it regardless, but beyond that there isn’t much else.

The work seems more of a drug induced nightmare, or a dream, or something like that overall. In that the ending does make some sense. But as for it being a work about an incubus that connection is very thin overall. I don’t feel like Damien is an incubus, though there is a touch of mind control or manipulation in the work that had some nice heat on its own.

The heat in the flash itself could have been a bit more, and I think the main problem is what the girls consume before they try out the Ouija board. I think that part of the story didn’t need to be there, and if it wasn’t I think what comes with Damien could have been a lot hotter, mind control or not.

The writing has its moments, some better than others, but it is the ending that just took a lot away from the story. I’m not sure that a vague ending was the best way to go when there could have been many other ways to end the work, even to the point of leaving the door open to something of a sequel. But really it is a hot flash, which the work manages fairly well, but in that heat there was too much confusion and misdirection for my liking.

Nothing really incubus-like in the story, and what there was provided a means to an end, that being a long drawn out hot flash that ended in a way that I found lacked a lot of heat. It could have been a lot better than it was in a lot of ways and that was the most disappointing thing of all honestly.